Deepika Padukone will play Romi Bhatia, Kapil Dev's real-life wife opposite Ranveer Singh, who will play Kapil Dev in the upcoming film, '83'. Deepika has credited her mother for her father's success.

Deepika Padukone and Ranveer Singh are definitely the 'IT' couple of the Tinseltown and over the years, these two have redefined #couplegoals and #martialgoals. Ever since their first film together, Ram-Leela, in 2013, when they had started dating each other to their wedding in 2018 in Italy, DeepVeer (as fans call them fondly) has become synonymous with what we call a 'perfect couple'. (Suggested Read: Ajay Devgn Reacts To Trolls Who Shamed Nysa Devgan For Visiting A Salon Post Her Grandfather's Death)

Deepika Padukone and Ranveer Singh connected on film sets and went on to give some of the biggest films of the decade. And guess what? They are going to work together for the first time after their marriage in the upcoming sports film, tentatively titled 83, which is Kapil Dev's biopic. The director of the film, Kabir Khan has roped in Deepika Padukone to play Romi Bhatia (Kapil Dev's real-life wife) opposite husband, Ranveer Singh (who is essaying the role of Kapil Dev). Commenting on the same, Deepika Padukone shared with the Filmfare, "I am so glad that Kabir came to me with it. This happened a couple of months ago when he was still casting the boys for the film. It’s just that I was busy with Chhapaak (her production debut, which wrapped up recently) and we were waiting for the right moment to make the announcement." Deepika Padukone was asked if the dynamics on the sets of a film and how they see each other post-marriage, will affect their acting. Replying to the same, Deepika was quoted as saying, "When you are in the business of movies, you are playing a character. Of course, all of this is yet to play out, but at the end of the day, you are essaying a role, and at that point, you are not thinking whether your co-actor is your husband, brother or someone you know closely. All you try to do is, be honest in that moment. The personal equation doesn’t spill over into the workspace. I can’t think of anyone else who could do justice to the role (of Kapil Dev), but if there was someone else playing him in the film, and not Ranveer, I would still do my part. This isn’t coming from a personal equation, but from my passion and enthusiasm for the film.."

On being questioned if she and Ranveer Singh feed off each other's energies as actors, Deepika Padukone replied, "Yes, I think so. We have worked in three films together, and they have all been successful. Individually, we are strong and different personalities, and when put together, we know how to feed off each other’s energy and that’s the beauty of it. I think Goliyon Ki Raasleela Ram-Leela was a classic example of that. It’s exciting and challenging at the same time." (Don't Miss: Hrithik Roshan's Sister Sunaina Roshan Wants To Move Out Of House But Has No Money (Details Inside)) The movie is not just about India winning the World Cup in 1983 but it's also about Kapil Dev and most importantly, how his wife, Romi Bhatia played an important role in his life. Commenting on the same and juxtaposing it with her family and mother, Deepika Padukone said, "Yes, I have seen it from close quarters because of my parents. A support system that a wife or family is to an athlete often goes unnoticed. It was important for me to be a part of this film to highlight the personal journey athletes go through when they are playing and performing at such a high level. The focus is usually on the professional achievements, and we tend to ignore their personal and humane aspects, and the sacrifices an athlete and his/her family have to make to support one person’s dreams and ambitions." 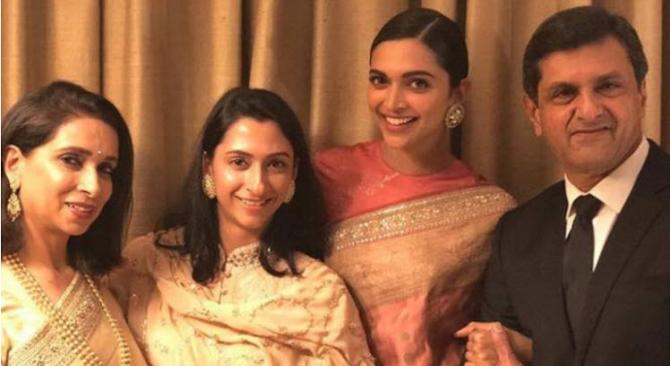 The 33-year-old actress further added, "I have seen that with my mother (Ujjala Padukone). I don’t think my father could have been half the champion that he was if it wasn’t for my mom. She, along with my grandparents and his siblings, have played an integral role in his success. In fact, I always have the utmost respect for homemakers, as their job is the most selfless. To be the backbone of the family, while others step out to nurture their ambitions, and to be that person who puts others’ needs before their own, is a very selfless thing to do. It was important for me to tell this story to the audience." Well, we can't wait to watch Deepika and Ranveer on the silver screens together after so long, right? Deepika and Ranveer have always been candid about their love and respect for each other. The Chhapaak actress had once said about Ranveer, “He is vulnerable, extremely emotional, very intelligent; childlike at times. That's not to say that his irrepressible energy isn't him, it's very him. He's a real people's person, but there's a quiet side to him too. I think I'm the more intuitive one. I'd say IQ is more him. But at the same time, he's not all like, 'I'm a man, I can't show my emotions.' He is sensitive, and so am I, and it makes it easier to share a life with someone who understands that." In another interview with Filmfare, Deepika had revealed how it is to live with Ranveer Singh and to share her space with him. She had quipped, “It’s beautiful living together. I’m sure cynics will say you’ve just gotten married to him, wait for 15 years or 25 years. We’ll figure it out then. For now, it’s the best feeling in the world. I looked forward to living together because I moved out of home at a young age to start working. A lot of my friends used to say we can’t wait to get out of our house. I was the opposite. I got out young. I craved for my family. When we were dating, it was about spending time with his family or going to Bangalore to be with my parents. I’d crave that quality time where you wake up in the morning and have someone to talk to while you’re having breakfast. For the last 15 years, I was alone.” (You May Like: Samantha Ruth Prabhu Replies On Twitter To A Report On Her Pregnancy, It Will Win Your Hearts) Deepika Padukone's statements on her working equation with husband, Ranveer Singh and her heartfelt words on her mother, is too sweet to miss, right? Drop your comments!