The Sen family hosted a reception bash for Rajeev Sen and Charu Asopa Sen in Kolkata and for the same, Charu repeated the saree, which she had worn for her court wedding, gifted by Sushmita Sen.

Kabootar Ja Ja Ja, Kabootar Ja Ja Ja, Pehle Pyaar Ki Pehli Chitthi Saajan Ko De Aa… Gone are the days when couples used to tie the letters on a pigeon’s legs and send it off to their partners to perpetuate their long-distance relationship. The era of writing love emails also went by as with the advent of social media as the expression of love took a major change. Over the years, the emotions and feelings remained the same, only the form of expression changed. Truly adhering to the millennial form the expression i.e. the social media PDA is the star couple, Rajeev Sen and Charu Asopa Sen. (Also Read: Hina Khan's Dinner Date With Her 'Partner In Crime' Rocky Jaiswal Is All That Love And Happiness Is!)

It was on May 04, 2019, when Rajeev Sen and Charu Asopa had finally confirmed their relationship and it was his superstar sister, Sushmita Sen, who had announced the news on social media. Then on June 16, 2019, Charu had added Sen to her name and had entered the bond of holy matrimony with the love of her life, Rajeev. Since then, Rajeev and Charu have proved to be exemplars of #CoupleGoals and there is no other couple in the telly world who does social media PDA as adorably as these two! Time flies in the blink of an eye and it looks like just yesterday when the first pictures of Rajeev Sen and Charu Asopa as husband and wife had emerged on the internet post their court wedding. Looks like the wedding fever is still not over for the Sen family as his father, Shubeer Sen hosted a reception bash for Rajeev and Charu in Kolkata. For the same, Charu repeated the red saree which she had worn for her court wedding while Rajeev looked dapper in a black suit. Sharing the pictures and videos from the party, Charu wrote, “Baba’s amazing reception party for us in Kolkata... #aboutlastnight #wehadanamazingtime #foggynight #cityofjoy #relivinggoamemories” and Rajeev captioned it, “Baba s Amazing Reception party for us in Kolkata #aboutlastnight #wehadanamazingtime #foggynights #cityofjoy #senfamily #relivinggoamemories.” How doting a bahu Charu Asopa Sen is and how much in awe is she, of her in-laws, is not unknown to anyone! When Charu’s father-in-law, Shubeer Sen had turned 76 on December 19, 2019, his daughter-in-law had penned down a heartfelt birthday wish for him. Along with a heartfelt picture, Charu had written, “Thanks for being an awesome Father-in-law. May God bless you more with good health, joy and love. Hoping that your special day is filled with all the things you love the most. Happy bday baba.” (Also Read: Ranveer Singh's Precious Birthday Gift For Wife, Deepika Padukone Didn't Go As Per His Plan) 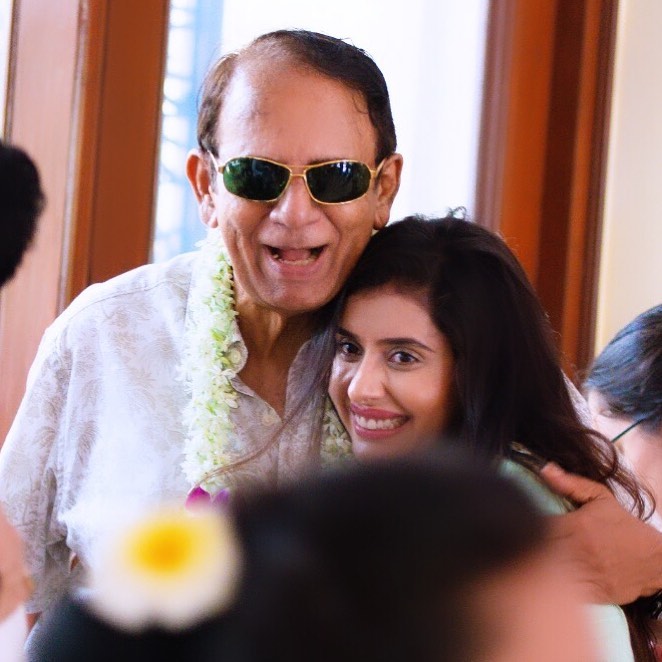 Soon after her wedding, Charu Asopa Sen had taken to Instagram to post a couple of pictures of herself as a bride and had written a heartfelt note for her superstar nanad, Sushmita Sen. Giving the world another reason to shout out loud ‘I want a nanad like Sushmita Sen’, the former Miss Universe had dressed her bhabhi, Charu as a bride and had also gifted her, the wedding lehenga! How amazing, was it! Charu had taken to Instagram and had penned a heartfelt ‘thank you’ note for Sushmita. She had written, “Every girl has a dream to see herself as a Bride, thank you Didi for making this dream come true so beautifully..! @sushmitasen47 Love you so much.” 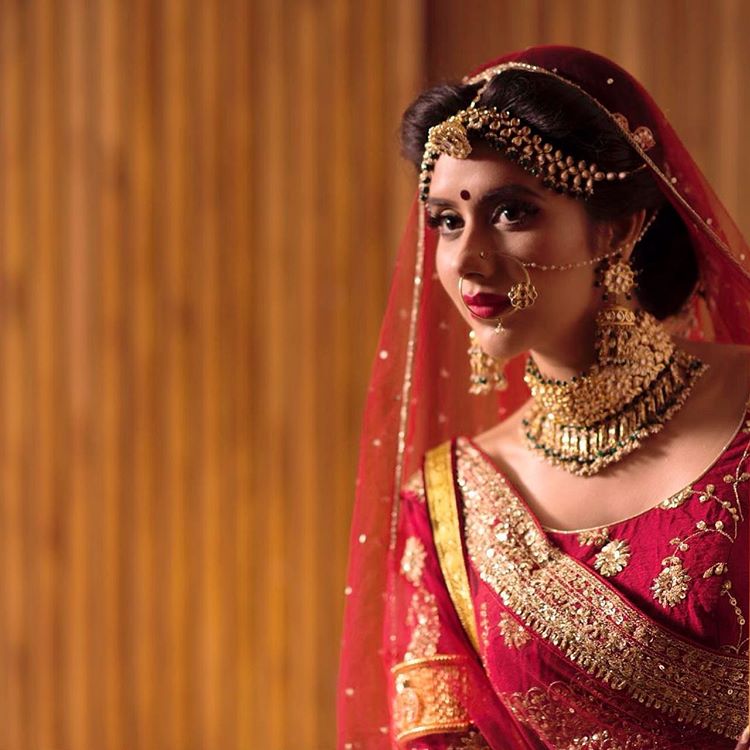 Not just their Goa wedding, Sushmita Sen had taken complete responsibility of dressing Rajeev Sen and Charu Asopa Sen for their court marriage too. Charu had taken to Instagram and had shared a note that Sushmita had written to the then-soon-to-be-weds, ahead of their wedding. The note read, “Dear Charu & Rajeev, Congratulations on your wedding day! May God always bless your union and gift you the courage to honour this beautiful commitment! Thank you for giving me the privilege to dress you both for your wedding ceremony. A moment and memory I will cherish forever!! Here’s to your happiness and prosperity together... All my love and blessings! Dugga dugga! Di, Renee and Alisah!" 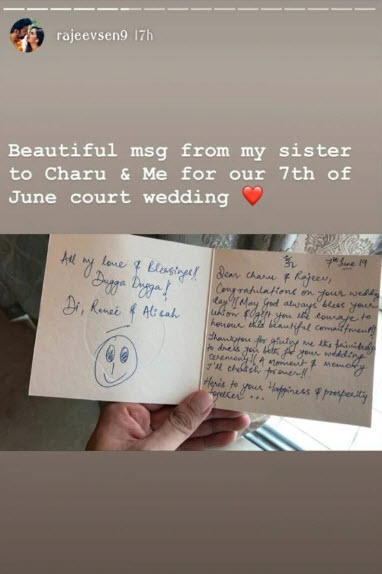 Every glimpse and video from Charu Asopa Sen and Rajeev Sen’s wedding boasts of the tumults of fun that they have had at the wedding. Proving it just right, Sushmita Sen had taken to Instagram to post a video of the final shot from Rajeev and Charu’s wedding. The video that Sushmita had posted, depicted a tiring wedding yet fun shot that the Sen family had clicked post their wedding. Sushmita had captioned the video as “#finaleshot directed by #yourstruly Weddings are famously tiring & so we decided to shot this picture for the post-wedding album!! Well done daddy, Maa, Renee & please notice just HOW natural are @asopacharu @rajeevsen9 #favourite #moment #family #weddingdone #rajakibittu #goa #duggadugga I love you guys!!” (Also Read: Kareena's 'Rare And Only' Picture With Mansoor Ali, Sharmila Tagore, Saif, Soha, Kunal In One Frame)

Don’t Charu and Rajeev look like a match-made-in-heaven on their reception bash? Keep us posted! One of the cutest couples of the glamour world, Charu Asopa and Rajeev Sen never miss a chance to shower love on one another. It was on June 16, 2019, when Charu had added Sen to her surname when she had tied the knot with Sushmita Sen’s brother, Rajeev Sen.