Charu Asopa's daughter, Ziana turned 8-months-old on July 1, 2022, and she spent her special day at her 'nanu's house. Check it out!

Popular television actress, Charu Asopa has been hitting the headlines ever since she announced that she wants divorce from hubby, Rajeev Sen. However, the actress is not letting her personal life impact her professional life, and she is acing her role as a hands-on mommy to Ziana while fulfilling her work commitments. Ziana is the apple of the eyes of her family members, who never fail to pamper her.

On June 1, 2022, Ziana Sen had turned 7-months-old, and her doting mommy had wished her in the sweetest manner. Taking to her IG handle, Charu Asopa had shared a beautiful picture of herself with her little munchkin. In the photo, the mommy-daughter duo could be seen sitting on a sofa, and the two twinned in black-coloured outfits. The picture spoke volumes about Charu's love and affection towards her baby girl, and it's too heart-melting for words. Sharing the picture, Charu had penned:

Charu Asopa Gets Her One-Month-Old Daughter, Ziana's Feet Impression, Shares A Cute Glimpse Of It

"Happy seven months bday my baby.. thank you for coming to my life. Love you my ghappu.."

On July 1, 2022, Charu Asopa and Rajeev Sen's daughter, Ziana turned 8-months-old, and she celebrated her special day at her mamu's house. A few moments back, Charu shared a new video on her YouTube channel and gave her fans a sneak peek into Ziana's fun time with her nanu, mama and mami. In the video, Ziana looked super cute in a red and white checkered jumpsuit, which she styled with a matching hat. The little munchkin was being pampered by her family members in the video, and her happiness was clearly visible on her face. Check out the video below:

Further in the video, Charu Asopa's brother and her bhabhi accompanied her for a walk, and they can be seen showering heaps of praises on the actress. The doting brother lauded his sister, Charu for being a hands-on mommy and shared how she is always on her toes to provide Ziana with the best life. Charu's bhabhi also mentioned that the new mommy always keeps Ziana's needs before hers and manages everything perfectly. To this, Charu thanked her bhai-bhabhi for appreciating her and added that Ziana is everything for her and she would never let anything come in between her parenting.

For the unversed, Charu Asopa fell in love with actress, Sushmita Sen’s brother, Rajeev Sen, and the two had got married on June 7, 2019. After three years of marriage, Charu had sent Rajeev a legal notice on June 7, 2022, to part ways amicably. She also mentioned that she had earlier patched up with Rajeev for herself and later did it for the sake of their daughter, Ziana. Revealing the reason for their separation, Charu said that Rajeev has trust issues and she doesn't want her daughter to grow up in a toxic environment. 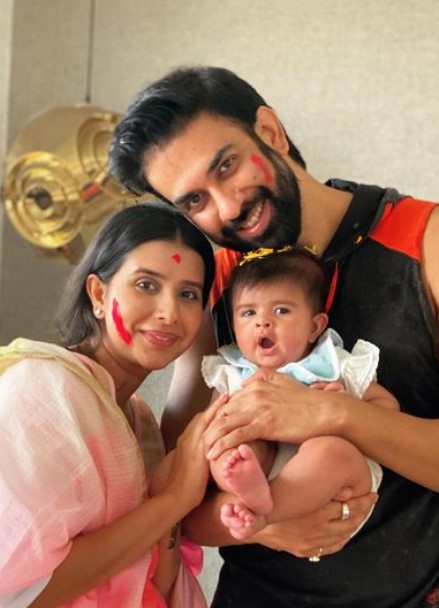 We can't wait to see more glimpses from Ziana Sen's 8-month-birthday with her family members!

Next Read: Ranveer Singh Can't Take His Eyes Off His Wife, Deepika Padukone At Shankar Mahadevan's US Concert