The big fat Indian weddings are just getting bigger and fatter. While many Bollywood movies still struggle to make an entry into the 100 crore club, there are many big and affluent celebrities and personalities who join that easily by throwing the most lavish weddings.

Here are a few of the most lavish Indian weddings that crossed the 100 crore mark. 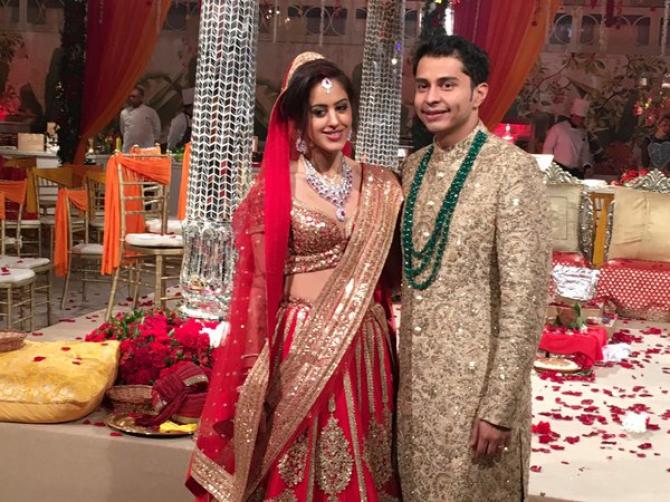 In the year 2016, one of the most lavish Indian weddings took place in Italy. Dubai-based Indian millionaire owning a pharmaceutical company, Yogesh Mehta spent Rs 140 crore on his son, Rohan Mehta's three-day-long extravagant wedding with Roshni, a London-based owner of a fashion company. The wedding took place in Florence, Italy, from November 25 onwards. Attended by more than 500 people, it was a lavish affair with many luxury hotels being booked for the guests. It also included breathtaking fireworks, crystal chandeliers, and luxurious feasts for the guests. Mr Mehta made sure that his son’s wedding was magical. It even got covered by the media of Florence. 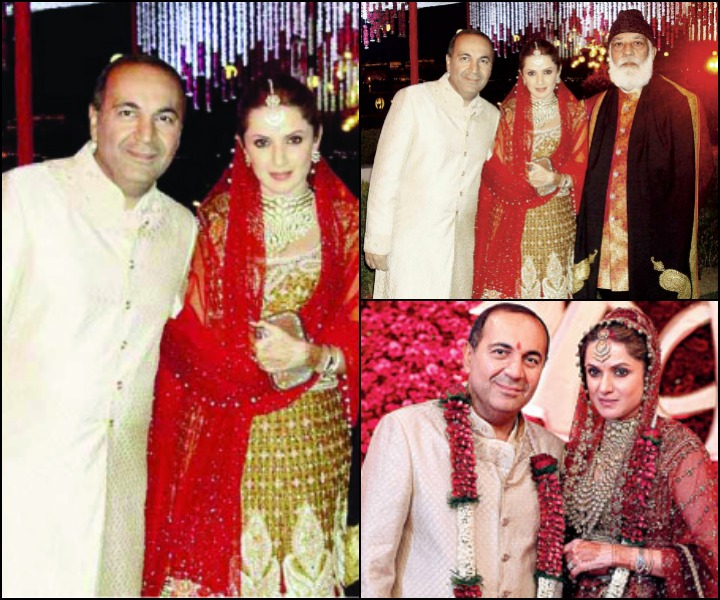 2015 witnessed the wedding of a UK-based billionaire, Sanjay Hinduja, who married the designer, Anu Mahtani, in Jagmandir Island Palace, Udaipur, in a 'big fat Indian' style. The couple had a star-studded pre-wedding party in Mumbai on February 6, 2015. And, the lavish wedding celebrations in Udaipur went on from February 10 to 12. 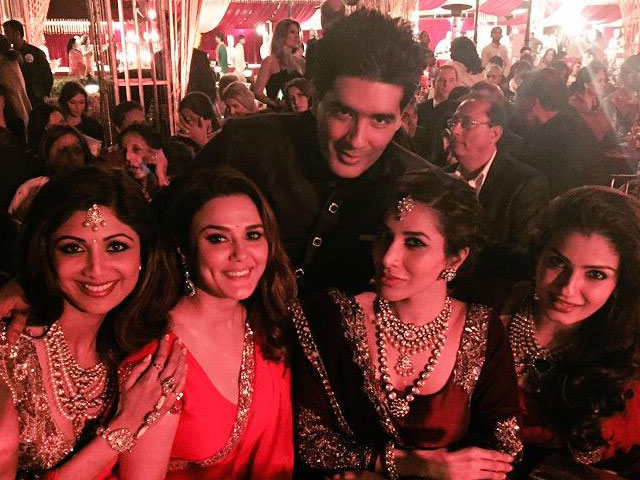 The sangeet ceremony saw performances of celebrities like Ranveer Singh, Arjun Kapoor and Nicole Scherzinger. And, that was not all! The wedding day saw the American singing sensation, Jennifer Lopez's performance as well. It is believed that the singer was put up at the Kohinoor Suite, The Oberoi Uday Vilas, which is one of the most expensive suites of the country and costs around Rs. 3 lakhs per night! Pramod Mittal, Lakshmi Mittal’s younger brother, organised the biggest of all Indian weddings in December 2013. He got his daughter Shrishti Mittal married to Gulraj Behl in a 505 crore (and still counting) celebration. The three-day wedding ceremony took place in Barcelona, Spain, and is said to have brought the city to a standstill. Helicopters hovered over the venue clicking aerial pictures of the ceremonies. 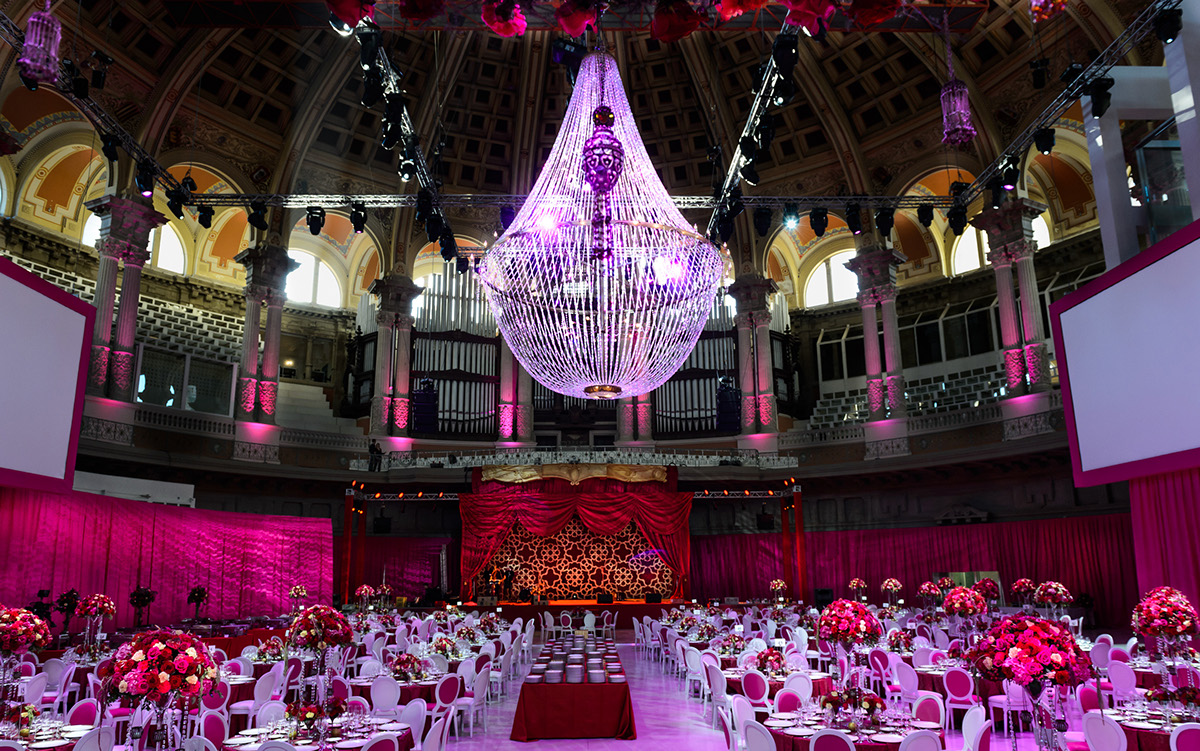 The wedding featured a stunning display of water jets and lights that danced to the tunes of Chariots of Fire. Michelin star chef, Sergi Arola took care of the kitchen and more than two hundred chefs were flown in from India, Thailand and Spain to prepare the wedding spread. The cake was a six-tiered 60 kg beauty. Fireworks concluded the ceremony with dazzle and glitter. Five hundred invitees were made to sign confidentiality agreements to limit the possibility of images from the events getting out. Sahara chief, Subroto Roy spent a whopping Rs. 552 crores for his sons’ wedding in 2004. Both his sons, Seemanto and Sushanto got married on the same day in the Sahara Village in Lucknow. The entire venue was decked up like a royal bride and lit up with traditional torch lights, hundreds of lamps and prism glasses. The glitzy and glamorous wedding saw a bevvy of celebs such as Amitabh Bachchan, Aishwarya Rai, Anil Ambani, Late Shri Baal Thackeray and Mulayam Singh Yadav. The invite to this lavish wedding had a special chip embedded in it for the easy identification of guests and to make sure that no gatecrashers could enter. The food comprised of 101 unique cuisines from all over the world. Shiamak Davar’s dance troupe entertained the guests on the occasion. Subroto Roy also got 101 underprivileged girls married on the occasion of his sons’ wedding. And, he even distributed food to over one and a half lakh beggars. 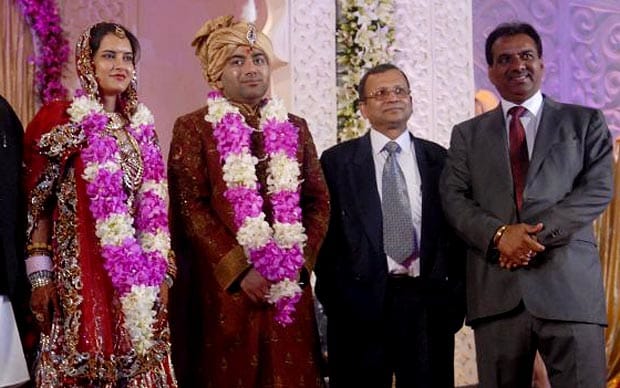 Congress MP Kanwar Singh Tanwar spent over 250 crores on his son Lalit Singh Tanwar’s wedding with Yogita Jaunapuria in Delhi, in 2011. The bride’s parents gifted a Bell 429 five-seater helicopter to the groom. The guest list of this wedding included about 15,000 people. Each guest received 11,000 rupees as shagun. Those who attended the lagan function got a 30 gms silver biscuit, a safari suit and Rs 2100 cash each. A whopping 21 crore was spent only on the tika ceremony for the groom's family. The bride was adorned in diamonds and the groom looked dapper in a designer black velvet sherwani. The food comprised of over a hundred delicacies including thirty types of kulfis. Be it the glittering wedding venue, the host of VVIP guests or entertainment, this wedding was an epitome of glamour and opulence.

Must Read: This Super-Fun Lip Dubbed Wedding Video Got Shot In One Go And It's Hard To Believe! 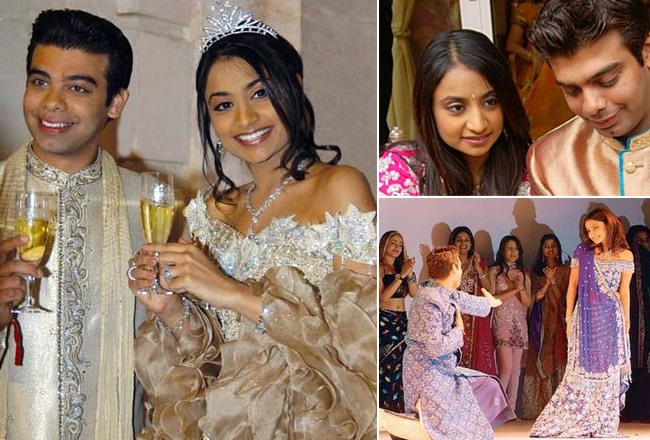 Lakshmi Mittal, the steel magnate, spent over Rs. 220 crores for his daughter Vanisha’s wedding in 2004. Looking beautiful in a red and gold Sandeep Khosla and Abu Jani lehenga, she married Amit Bhatia, a banker. The engagement was held in the Palace of Versailles and the wedding took place in the Chateau Vaux le Victome in France. The engagement dinner was organised at the Jardin des Tuileries and the best Indian chefs were flown in for the preparations. 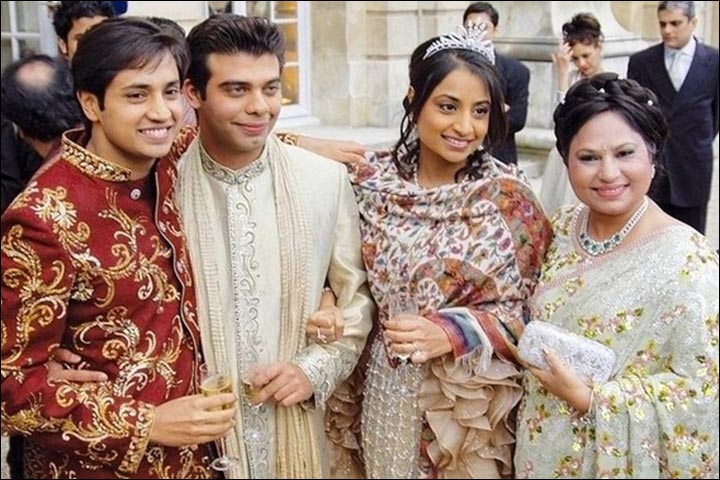 For the reception, fireworks were arranged on the Eiffel tower. It was also reported that celebrities like Kylie Minogue and Shah Rukh Khan were paid a whopping £300,000 for their appearance. Apart from them, other B-town stars like Aishwarya Rai, Akshay Kumar and many others performed at the wedding. It was also reported that Javed Akhtar wrote a special play based on the couple's love story, which was performed by Mittal family. Guests from India were flown down in 12 private jets. The wedding celebrations lasted for six long days. Mallika Reddy, daughter of the Hyderabad-based industrialist G.V. Krishna Reddy, married Siddharth Indukuri, the young scion of the Indu Group in 2011. It was the grandest wedding of Hyderabad city, with the who’s who of Bollywood, business, fashion and politics present. The reception, held in New Delhi, was graced by the then Prime Minister Manmohan Singh. The wedding mandap, designed by celebrity designers Abu Jani and Sandeep Khosla, was adorned with red velvet and zardozi work. 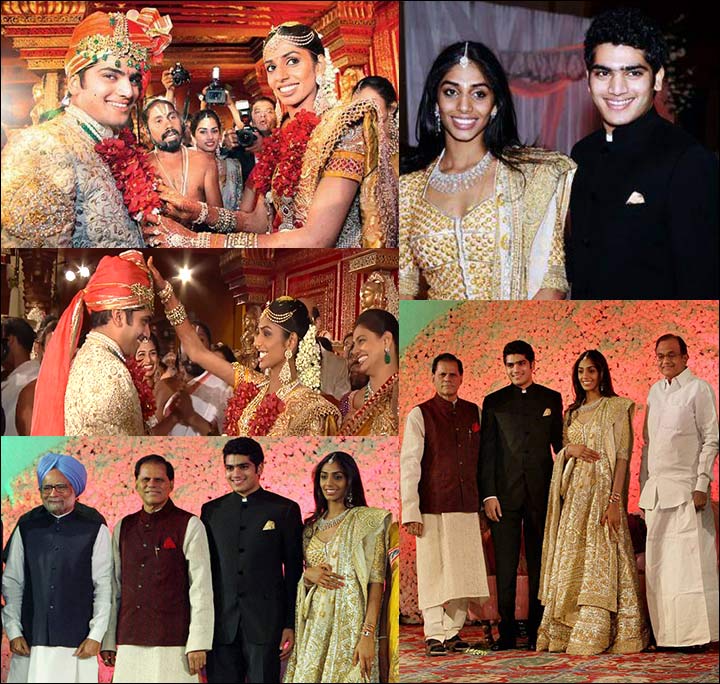 It was said that special guests received solitaire rings and sarees designed by ace fashion designers with the wedding invite. At the venue, chandeliers were decorated with hundreds of real jasmine swags! The food was purely vegetarian, but the variety was enormous. Entertainment comprised of Indian classical dances, which retained the traditional theme of the wedding. The celebrations were billed to be over 100 crores. 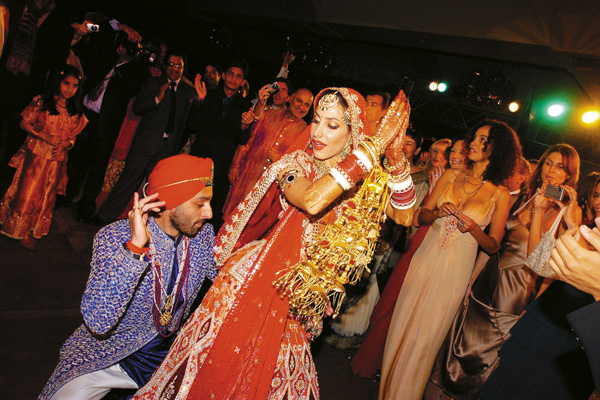 New York-based hotelier Vikram Chatwal married his sweetheart, model Priya Sachdev, in a grand 100 crore wedding that had celebrations spread over three splendid cities of the country– Mumbai, Delhi and Udaipur, for over a week. More than a thousand guests from all over the world were invited. No wonder they were dazzled by the stupendous glamour, decorations and hospitality at the wedding. Private jets were arranged to bring in these guests from over 26 countries! More than 50,000 tonnes of flowers were brought in from all over the world, to be used for the decorations. Around 3000 candles were used to spread a soft romantic glow at the wedding venue. The mouth-watering food was served till the wee hours of the morning. The bride and the groom looked like royalty in their elaborate designer wedding outfits. Gali Janardhana Reddy’s daughter’s wedding made headlines, all thanks to its grandeur. This Reddy wedding’s budget was a whopping 500 crore! The former politician and current mining baron spent lavishly to make his daughter’s special day a unique one, in terms of jewellery, outfits, decoration and food. The bride wore a Kanjeevaram saree worth Rs. 17 crore for her big day along with all diamond jewellery, worth Rs. 70 crore. The wedding took place during the time of demonetisation, when the entire nation was facing major cash crunch! 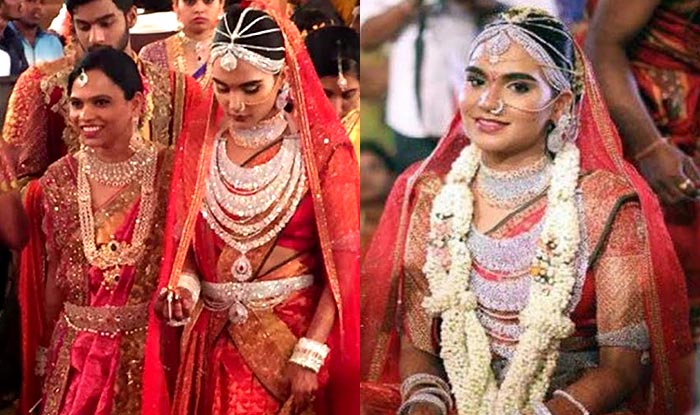 The grand wedding took place in Bangalore Palace which was made to look like a replica of the ruins of Hampi. Many buildings were made to resemble Lotus Mahal, King Krishnadevaraya’s castle and the Vijaya Vittala temple. It was the most magnificent wedding that ever took place in India!

Recommended Read: The Owner Of A Famous Indian Restaurant Chain Got Married And The Pictures Are Breathtaking

Indian weddings are beautiful, and when you have the unlimited budget to spend on celebrations, they become an epitome of grandeur and opulence.