Bollywood actor, Arjun Kapoor remembered his late mother, Mona Shourie, on her birth anniversary and penned a teary-eyed note in her memory, along with a picture of her portrait at his home.

Famous Bollywood actor, Arjun Kapoor is the son of veteran film producer, Boney Kapoor and his first wife, late Mona Shourie. The couple had got married back in 1983 and had welcomed two children, Anshula Kapoor and Arjun Kapoor, in their lives. However, it was in 1996, when Boney had tied the knot with the late actress, Sridevi, souring the relationship with his first wife, Mona. Soon, Boney and Sridevi had welcomed two daughters, Janhvi Kapoor and Khushi Kapoor.

Unfortunately, Mona Shourie had died in 2012, leaving a void in her children's lives. First, their parent's separation and then their mother's death had left Arjun Kapoor and his younger sister, Anshula Kapoor, completely devastated. Since then, Arjun and Anshula are supporting each other at every step of their respective lives and trying their best to fill the void created after their mother's demise.

Recommended Read: Kratika Sengar And Nikitin Are Enjoying Their Babymoon In Jodhpur, The Mom-To-Be Shares The Details On February 3, 2022, Arjun Kapoor took to his Instagram handle and shared a picture of his late mother, Mona Shourie's portrait at his home. In the picture, we can see some flowers placed beneath the photo frame, along with a table diya. Also, we can spot the actor's puppy in the frame, who is gazing towards Arjun's mother's frame, as the actor captured the beautiful moment on his smartphone. Along with the priceless picture, the doting son penned a heartmelting note in the memory of his late mother on her birth anniversary. In his painful note, Arjun opened up about the emptiness that he experiences on a daily basis in his life and how badly he wants to see and hear his mom. His teary-eyed note in the caption can be read as:

"Happy birthday Mom. I miss seeing your name on my phone. I miss coming back home to you. I miss seeing you & @anshulakapoor talk away endlessly. I miss you maa... I miss saying ur name I miss your smell I miss being immature & having you sort me out I miss being a child I miss smiling with you I miss being ok I miss feeling whole because I had you be my side... I am incomplete without you I just hope this version of me is still making you proud as u watch over us. Love you. Your flawed over honest chubby cheeks son." 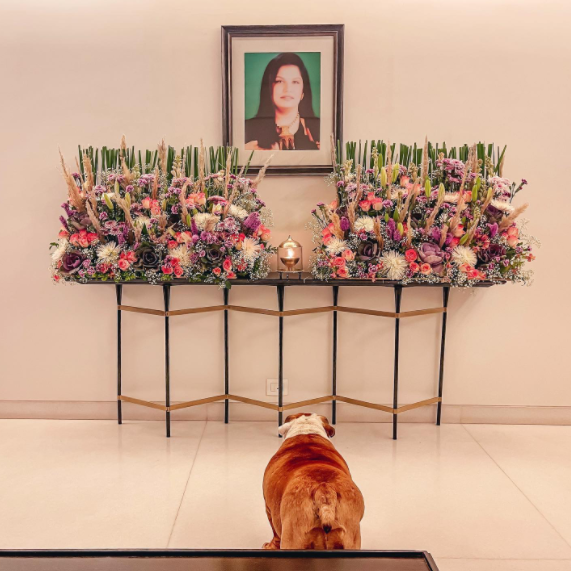 A few moments back, Arjun Kapoor's sister, Anshula Kapoor, also took to her IG handle and shared the same picture to remember their late mother, Mona Shourie, on her birth anniversary. The doting daughter penned a beautiful note in the caption in which she opened up about how much she misses her mother. From revealing that even after 10 years, the pain of not having her mother with her is still too hard to digest to admitting that after her demise, dahi kadhi and rice doesn't taste right, Anshula penned a note that will surely move you in tears. Her note in the caption can be read as:

"Happy Birthday Ma. That feeling of "I want my mom" really doesn't have an age limit. And grief has no time limit either. It's been 10 years, but on most days it still takes so much work just to feel okay. Ma, I hope you're looking at us from wherever you are and you're proud of @arjunkapoor & me. He makes me proud every single day, and on days like today when my heart breaks a little extra, knowing I have him makes the cracks heal a little faster. Dahi kadhi and rice doesn't taste the same without you Ma, but I'm going to toast to you and have some for lunch anyway. Love you. You're the most precious piece of my heart. #AlwaysAndForever."

Don't Miss: Bharti Singh Gives A Tour Of Her Lavish Home, Ahead Of The Birth Of Her First Child The doting kids, Arjun Kapoor and Anshula Kapoor are missing their mother, Mona Shourie, badly on her birthday and their respective posts on Instagram prove it. Arjun and Anshula also shared a priceless picture with their late mother on their respective IG stories. On one side, Arjun shared a memorable picture from his childhood with his mother and atop it, wrote, "Happy Birthday Maa. Someday soon we will smile together again… We will be happy and I'll get to be your child and nothing else." On the other hand, Anshula shared a beautiful picture from one of her brother's fan pages, featuring Arjun and Anshula looking towards their mother, Mona. Anshula penned, "Happy Birthday Maa", atop it. 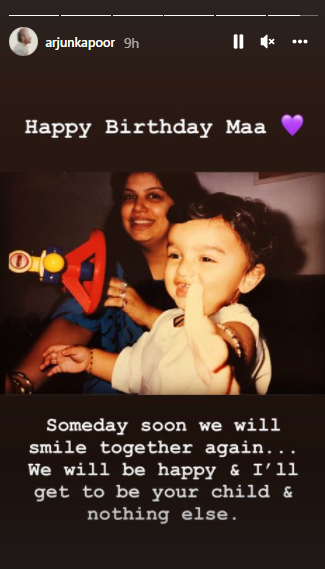 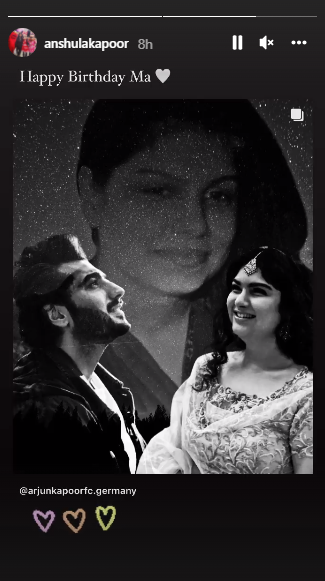 You'll always be in our memories, Mona Sourie!

Also Read: Mrunal Jain Shares The First Picture Of His Newborn Son From The Hospital, Pens An Emotional Note 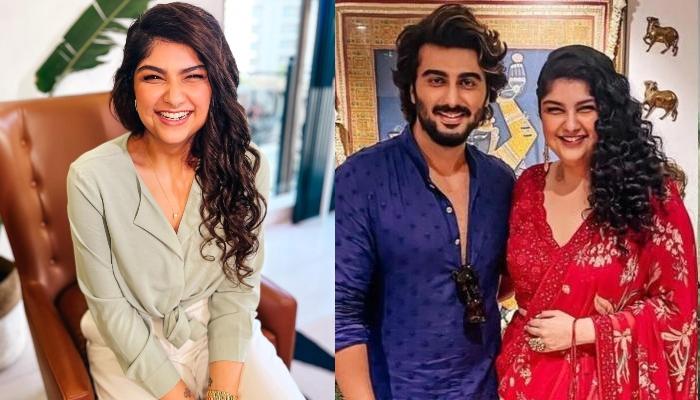