Anushka and Virat used to travel from one country to another to meet each other, However, Anushka now revealed the number of days they had got to spend together in the first 6 months of marriage. Anushka Sharma and Virat Kohli are the household names with the amount of love and understanding they shower on each other. Both celebrities have demanding and challenging careers, yet the two ensure to support each other through all the ups and downs. While Virat never stops praising his wife for her professional endeavours, Anushka too makes it a point to not let her husband feel alone and becomes his personal cheerleader through everything in his life. (Also Read: Sushant Singh Rajput's Sister, Shweta Shares A Hugging Picture Of Her Daughter With Her 'Mamu')

Anushka and Virat had ‘promised each other to be bound in love forever’ on December 11, 2017, after all the speculations. They have given us the perfect example of being grounded, and honest, despite the huge fan following. They made us believe that marriage is about the union of two people and their families, and this simplicity had gotten all of us hooked to them then, now and forever! While it seems that the two used to travel from one country to another to meet each other, Anushka now revealed that their busy schedules had made it hard for them to meet post their marriage. As we all know that Anushka Sharma and Virat Kohli have demanding careers and they have to travel countries and places, it is bound to get hard for them to spend time together. Now, Anushka Sharma reveals that the couple had got to spend only 21 days together after the first six months of their marriage. In an interview with Vogue, Anushka revealed, "People assume when I’m visiting Virat or when he is visiting me that it’s a holiday, but it’s really not. One person is always working. In fact, during the first six months of our marriage, we spent 21 days together. Yes, I actually calculated. So when I visit him overseas, it’s to squeeze in that one meal together. It’s precious time for us." 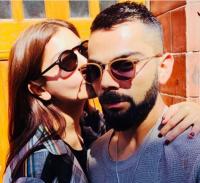 Well, this means the lockdown has actually come as a boon for the couple as now they are finally getting the much-needed time together. However, this doesn’t make Anushka any less empathetic to the ones suffering during the lockdown. Talking about the people struggling, Anushka said, “Whatever little inconveniences I have had to face in these few months is insignificant compared to what so many others in our country are facing—people are unable to go home, some are struggling with loss of income and home, others are facing starvation even as many more deal with their loved ones being unfortunately struck by this disease."

This lockdown phase, Virat and Anushka were quite vocal about their love story, which they are mostly tight-lipped about. In a conversation with Vogue, Virat had recalled his first meeting with Anushka Sharma and how he was nervous about the same as Anushka has been on sets regularly and thus is a confident actor. In his words, “The first time I met her I was very nervous and that’s why I cracked a joke because I didn’t know what to do. I thought I was being funny, and I said something which wasn’t probably the right thing to say. My joke became such a weird moment for myself. She was so confident, she is on sets regularly.”

As we said, Virat has been too vocal about his love story these days. In a conversation with the cricketer, Ravichandran Ashwin, Virat had talked about how he shares the same wavelength with Anushka, making it easy to have small conversations. He had said, “The best thing is that when you have the right partner who is also working at a level of excellence, as you mentioned, in her own field, she can totally understand my mindset and I can understand her mindset. It becomes so easy to have conversation about what you're going through. What is it that is making you feel good or bad? What happened during the day that mentally put you down or boosted your confidence? Small conversations like that.” (Don't Miss: Sushmita Sen's Daughter, Alisah Sen Embarrasses Mom During Instagram Live After Calling Her This)

"Anushka is brilliant at what she does. At her craft, she is outstanding. She understands what I'm exactly saying without me even talking, with my body language." - @imVkohli ðŸ’• #Virushka pic.twitter.com/s7KmNRRjQQ — Anushka Sharma FC™ (@AnushkaSFanCIub) May 30, 2020

In an Instagram live session with Indian footballer, Sunil Chhetri, Virat had revealed that he had never proposed his wife, Anushka Sharma formally. He had said, “Mera yeh maana hai ki agar jab aap life khul ke jeete ho aur pyaar karte ho toh koi special day na toh Valentine's Day kuch hota hai. Every day can be Valentine's Day and special. And what Anushka said is completely true, we never felt like we needed to do that, we knew that we were going to marry each other, there were no doubts about it ever. So once we knew that everything is going smooth, we were super excited to start our life together. And organically things went on.” (Recommended Read: Sangeita Chauhaan's Reply When Manish Raisinghan Asked If He Can Go On Post-Marriage Bachelors' Trip)

We are glad that Anushka and Virat have finally got to spend time together because of the lockdown!