It is a very rare scenario when the world sees two half-siblings bonding with each other as their own. But Boney Kapoor’s children - Arjun Kapoor, Anshula Kapoor, Janhvi Kapoor and Khushi Kapoor have broken the stereotype and set the bar high for half-sibling love! The once-not-so-fond-of-half-siblings can’t seem to get enough of each other nowadays and they are leaving no stone unturned to make each other feel special. Something similar happened on March 6, 2019, when Janhvi turned 22 and she ringed in her birthday with father, Boney Kapoor and sister, Khushi Kapoor at the Kashi Vishwanath temple, Varanasi. (Also Read: Arjun Kapoor Shares A Birthday Wish For Half-Sister, Janhvi Kapoor, Says 'The World Is Your Oyster')

Janhvi Kapoor, Boney Kapoor and Khushi Kapoor returned to the bay on March 6, 2019, itself, and the birthday girl got the best surprise from her half-sister, Anshula Kapoor as she entered her room. After she got the ‘best gift ever’ from her father, Boney Kapoor i.e. boxes of Nutties, Janhvi got a special surprise from Anshula. The doting sister has put together a room full of pink balloons and placed sticky notes with special messages written on it from her loved ones, in the shape of a heart. It truly seemed like a moment straight out of a rom-com, and every girl would wish to get such kinda surprise someday! 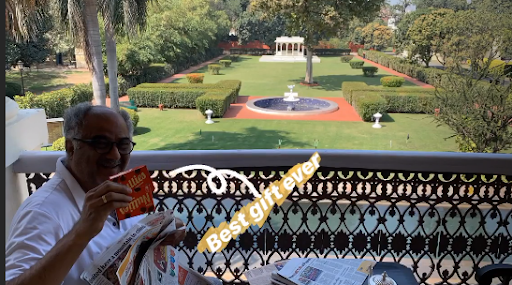 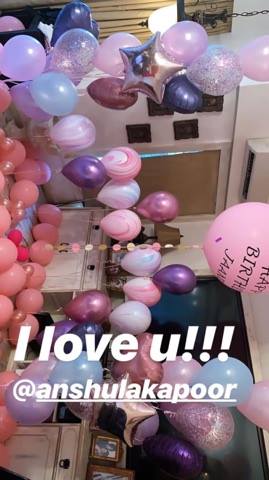 On her birthday, Janhvi Kapoor had posted a photo of hers, gazing at the beautiful ghats of Varanasi, and captioned it as, “Thankful & grateful. For all your love and blessings. For every opportunity. For my family. For my country. Love you all!” Janhvi Kapoor celebrated her birthday by cutting her birthday cake with a sword while her father and sister cheered on. The birthday girl was dressed in an ivory chikankari kurta. Here are the pictures: 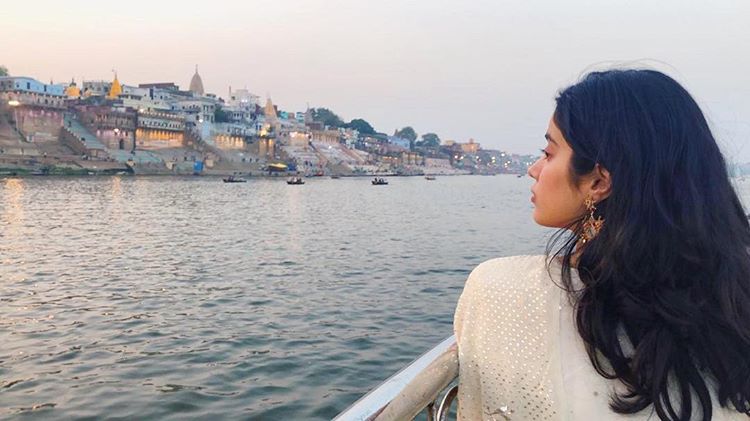 According to a report in Mumbai Mirror, Janhvi Kapoor wanted to visit Tirupati in Andhra Pradesh but could not go this time. "We drove to Varanasi after the day's work so I could see the Ganga aarti and go to the Kashi Vishwanath temple. I wanted to visit Tirupati (in Andhra Pradesh) again, mom (Sridevi) used to climb up to temple every year for her birthday when she was working. I went there earlier this year and wanted to go again on my birthday, but arrangements couldn't be made on time. I might go next week." (Also Read: Janhvi Kapoor's Unseen Childhood Pics Shared By Sonam Kapoor And Maheep Kapoor On Her Birthday) Janhvi Kapoor, who is essaying the role of IAF pilot Gunjan Saxena in Kargil Girl, talked about an ideal birthday plan for her and had stated, "There's no better place for me in the world than a film set. My only wish is that I get the chance to do good work and make my parents (Boney Kapoor and Sridevi) proud." Talking about the film, Janhvi further added, "I have a day's work left in Lucknow. After which I resume work next month. I feel blessed that I got the chance to work with this team." 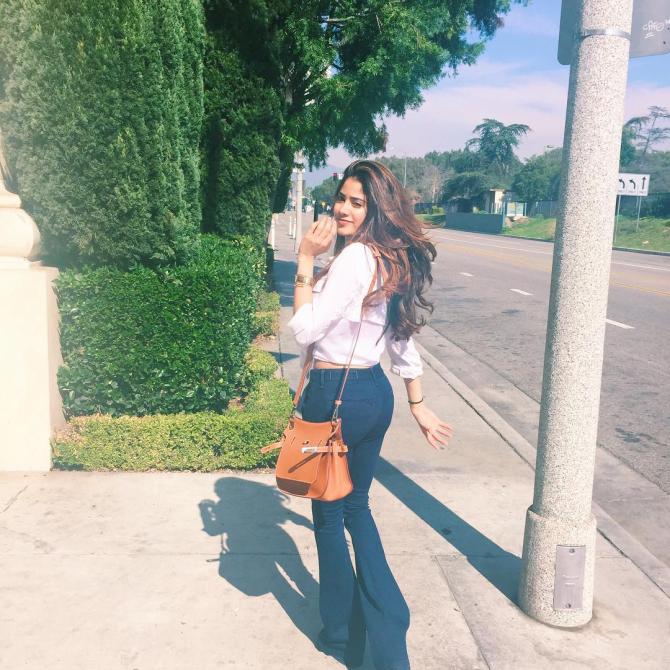 As we all have seen, Arjun Kapoor and Anshula Kapoor have been the constant pillars of strength and extremely protective about their little sisters, Janhvi Kapoor and Khushi Kapoor, the Dhadak debutante too, acknowledged the love she found in her elder siblings. Janhvi had shared in an interview, “It comes from seeking a sense of protection. A significant figure in our lives- my mother- wasn’t there anymore. Whom could we rely on? So, Khushi and I found ourselves leaning on them. A strong trust was forged between us. They’re so chilled out, such gracious and strong people, who encourage you and are real with you. We’re blessed.”

At yet another interview during the promotions of her debut film, Dhadak, Janhvi Kapoor spoke about what Arjun Kapoor and Anshula Kapoor means to her and Khushi Kapoor. She had shared, “The only reason we can stand strong after whatever happened is because of the kind of love and support Arjun bhaiyya and Anshula didi [half-siblings] have been giving us [she and her younger sister, Khushi]. It’s a family dynamic that I relish. I am very thankful for them. I couldn’t have asked for a better brother and a better sister. They have given us a lot of strength. He is a very wise man and has given tips like, ‘just be honest, be yourself and be respectful towards people.’ Somehow, when he says it, I take it like the gospel truth.” (Also Read: Malaika Arora Is Already Bonding With Arjun Kapoor's Family, Chills With His Sisters, Rhea and Sonam) What is the best surprise you’ve planned for your sister? Keep us posted! The young actress, Janhvi Kapoor and her sister, Khushi Kapoor are the daughters of Boney Kapoor and his late wife, Sridevi. Before Boney Kapoor had tied the knot with Sridevi, he was married to Mona Shourie and their relationship had ended after 13 years of being together. The Ishaqzaade actor,