Anita Hassanandani's soon-to-be-born baby kicks her as she romances with her husband, Rohit Reddy for the maternity shoot. Check out the video inside! 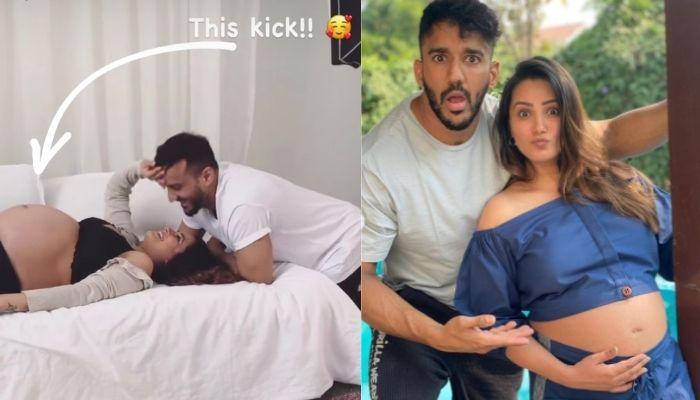 The kicks are not always bad, some kicks give you a memory of a lifetime. And these are the kicks experienced by the expecting mother. It is a surreal feeling as it not only ensures that your baby is doing well, but it is also a way that your baby communicates with you. They express their joy and happiness at times and we can vouch on that as in the case of Anita Hassanandani, we have seen her soon-to-be-born baby kick when her hubby, Rohit Reddy showers love on her. (Also Read: Jasmin Bhasin Is Missing Her Beau, Aly Goni, Shares A Mushy Picture From 'Bigg Boss 14')

After weeks of speculations and teasing their fans with camouflaged pictures and videos, Anita and Rohit had confirmed the news of their pregnancy, and now the couple is in their last trimester as they expect their first child in February 2021. The parents are busy with their maternity shoot of late and Anita had shared a glimpse of the same. On January 11, 2021, taking to her IG handle, Anita Hassanandani had shared a video which was a BTS from her maternity shoot. Anita had looked like an angel in her white outfit as she had teamed a white off-shoulder bell sleeved crop top with a white side slit skirt. Accentuating her look was her 8 months baby bump, which she could be seen holding lovingly while giving some cute expressions. Her hubby, Rohit Reddy had twinned with her in a white shirt, pairing it with blue denim. Sharing the video, Anita had written, “Shooting with Bae and to be BaeBee.”

Now, Rohit Reddy has shared another BTS video from their pregnancy shoot which captured a heart-melting moment. Taking to his IG stories, Rohit shared a video, where we can see Anita lying on a couch, wearing a black ensemble, whereas, Rohit was sitting on his knees behind her head as the two were busy romancing and having a conversation. As the mommy-to-be lovingly pushed daddy-to-be behind, the baby inside the tummy can be seen kicking Anita. Even though it was for a fraction of second, we were in awe of this beautiful moment. Sharing the video, Rohit wrote, “This Kick!!” atop it.

This is not the first time that Anita has shared the experience of her baby kicking her when Rohit gets mushy with her. On November 17, 2020, Anita had taken to her Instagram handle and had posted a lovely picture with her hubby, Rohit, wherein she could be seen flaunting her baby bump. Alongside the picture, Anita had shared the blissful feeling of experiencing the baby kicks. She had written, "While I share this kiss, I feel the kicks. It is so amusing exciting miraculous out of the world unreal experience cannot be described in words. Every mother would understand what I’m feeling." (Don't Miss: Babita Phogat And Vivek Suhag Blessed With A Baby Boy, The Latter Shares The FIRST Picture)

In an interview with Pinkvilla, Anita had talked about her hubby, Rohit's behaviour and whether he is ready to be a father. The actress had revealed. "Rohit is very excited and thrilled. We already have a pet together and he is very very involved with Mowgli as well. So, as a parent, I know he will be 100% an active father. He is really looking forward to fatherhood. I think he is already so responsible, so excited, I am getting to see new sides to him. I think it is an exciting phase and we both are looking forward to it."

Anita had further shared that she is excited to embrace the motherhood journey and she is all okay with putting on the weight that comes with it. She had said, "I was just excited to embrace it, it did not even cross my mind. Weight is the smallest thing, if you want you can lose it. Right now, I just want to enjoy this phase and embrace motherhood. I have worked all of my life and worked hard, now is the time to focus on my motherhood phase. I want to enjoy every moment. I am in no hurry. It is okay, the weight will go. When the doctor tells me that I can put on 12-15 kgs, I am like I can put on whatever is needed, because I want to relish these moments." (Must Read: First Picture Of Virat Kohli And Anushka Sharma's Baby Girl, Shared By 'Tauji', Vikas Kohli)

We wish Anita a happy and healthy pregnancy!