Ananya Panday is making her big Bollywood debut with 'Student Of The Year 2' and for the same, the star's best friend, Shanaya Kapoor posted a heartfelt letter for her.

You should actually thank your stars if you are still best friends with the one, whom you learnt alphabets with! True friendship is rare and hard to find but if you do, nurture it, water it, resolve fights, just don’t let it go! Your 4 am friends are the most precious ones, someone with whom you can talk about the silliest of matters without the fear of being judged. And when it comes to giving the world goals of any kinds, we totally look up to our Bollywood celebs. And speaking of longtime BFFs and true friendships, it remind us of Ananya Panday, Shanaya Kapoor and Suhana Khan. (Do Read: Khushi Kapoor Arrived For 'Student Of The Year 2' Screening With A Mystery Man, His Details Revealed)

More than the budding superstars, their mommies too, are best of friends and often share adorable glimpses from their kids' childhood. For instance, only yesterday (May 09, 2019), Ananya Panday’s mother, Bhavna Panday had taken to Instagram and posted an adorable video of a baby Ananya and Shanaya, decked up in traditional wears, with mehendi-clad hands looking adorably at each other and then at the camera. In the video, we could also spot Shanaya’s mommy, Maheep Kapoor in the background. Sharing the video, Bhavna had captioned it with an array of heart emojis and tagged the three leads in it. Take a look at the video here:

Today (May 10, 2019), Ananya Panday is making her big Bollywood debut with Karan Johar produced, Student Of The Year 2 and for the same, the star’s best friend, Shanaya Kapoor posted a heartfelt letter for her best friend. Sharing a picture of the duo breaking into jolts of laughter after a swim with a flower tucked behind their ears, wrote, “10/05/19, I cannot believe that this day has come, I’m crying while writing this post because it feels so surreal. We’ve grown up dreaming together, wishing together, working together, and today your journey has started. We’ve spoken about this since the day we could just about talk and I’m so happy that this moment has finally come and everyone’s going to see you on the big screen. From going to gaiety galaxy to watch Agneepath together to watching movies every Friday, without fail together, to dancing to every Bollywood song at every club together, your day into our favourite dream world has come, my Anne. I know how hard you’ve worked for this and you truly deserve all the happiness and success the world has to offer. The most special day, my superstar’s entry. I love you.” Maheep captioned the note as, “#TheseTwo”, while Ananya commented, “She’s so cute man.” 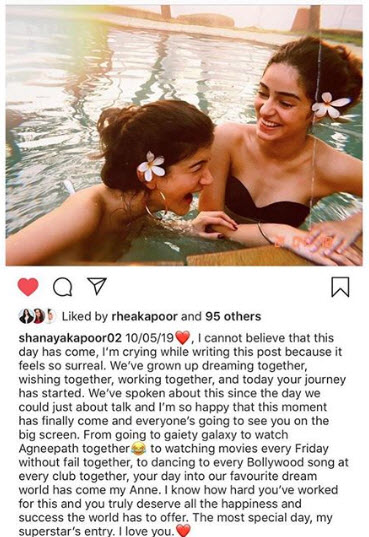 Yesterday (May 09, 2019), Maheep Kapoor had taken to Instagram and posted a video of besties, Shanaya Kapoor and Ananya Panday, having dinner together while watching Koffee With Karan. Sharing the video, Maheep poured in her heartfelt wishes for Ananya’s big Bollywood debut, which could be read as, “My darling @ananyapanday , I wish you all the success as you move onto the next chapter in your life. I know you are going to kill it !! #BestWishesForYouAlways #ShineBright #DontMessWithThisGirlDuffer #StudentOfTheYear2 10/5/19 #BigDay.” In the video, Ananya had posted two comments which could be read as “HAHAHAHHAHAHHAA love u!!!!!!!!” and “In our element”. Karan Johar wrote, “Oh god!! I feel so old today!” Here is the video and a snapshot of all the comments thereafter: (Must Read: Misha Kapoor And Mira Rajput's Latest Pics Prove They Are The Most Fashionable Mom-Daughter Duo) Has it ever happened to you that your best friend's mom starts loving you more than her own child? We can totally see a glimpse of the same with Ananya Panday and Maheep Kapoor. Just a few days back, Ananya Panday had taken to Instagram and posted a throwback picture from her childhood days, wherein both she and her bestie, Shanaya Kapoor were cuddled in their mommy’s arms. Since it was for her best friend’s mother, Maheep Kapoor’s birthday, Ananya had written the words, “Happy Birthday Dude. Love you always Maheep Kapoor”, atop the picture. Take a look at the same below: Ananya Panday, in an interview, had revealed an interesting account of her, Shanaya Kapoor and Suhana Khan’s friendship from her glorious childhood days. She had shared in an interview, “I've always wanted to be an actor, but I'm not a trained actor. I've just played 'acting games' with Suhana Khan (Shah Rukh Khan's daughter) and Shanaya Kapoor (Sanjay Kapoor's daughter), imitating our moms Gauri, Bhavna and all. (Smiles) I've pursued drama in school. Since my grandparents were doctors and I love biology as a subject, I almost had this moment in life when I thought I'll be a doctor. But no, acting is my calling. I'm a very filmi bachcha.” (Also Read: Neha Dhupia Shares Her Unseen Wedding Trailer, Wishes Husband Angad Bedi On Their First Anniversary) 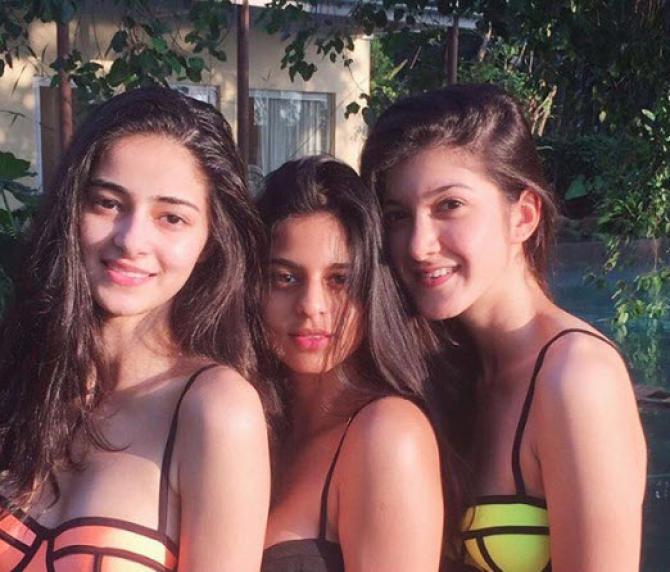 Guys, do you have a Shanaya Kapoor in life? Tag them in the comments section below.