Amitabh Bachchan posted some unseen pictures from the Diwali celebrations with his family including Jaya Bachchan, Abhishek Bachchan, Aishwarya Rai Bachchan and Aaradhya Bachchan at their home, Jalsa. 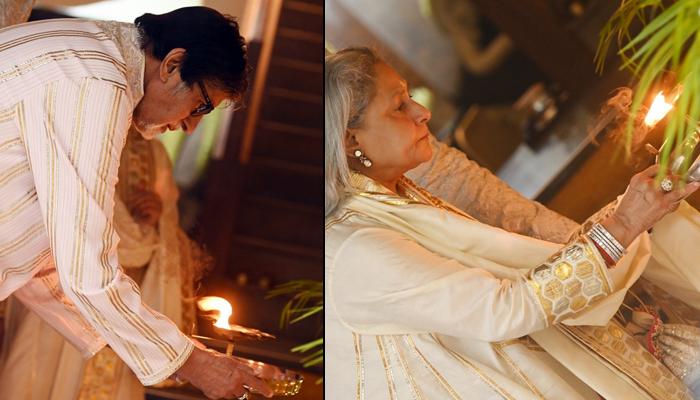 It has been three days since Diwali, but the festive hangover doesn’t seem to subside on social media. The past one week has been about the grandest B-town Diwali parties, discussing and taking inspirations from celebrities on how to dress up for the festivities, ‘yaying and naying’ the Diwali looks of divas and hunks of the Tinseltown. The most talked-about Diwali bash of 2019 is of the Bachchans, who had celebrated it with grandeur and pomp at their residence, Jalsa after two years. (Also Read: Abhishek Bachchan Is Planning A Rome Gateway For Wife, Aishwarya Rai Bachchan's 46th Birthday)

You name a celebrity and they were present at the grand Diwali bash at the Bachchan abode, Jalsa, hosted by Amitabh Bachchan and Jaya Bachchan. From Shah Rukh Khan, Gauri Khan, Shahid Kapoor, Mira Rajput Kapoor, Ishaan Khatter, Anushka Sharma, Virat Kohli, Mukesh Ambani, Nita Ambani, Radhika Merchant, Parineeti Chopra, Sania Mirza, Kiara Advani to Bipasha Basu Singh Grover and Karan Singh Grover, the who’s who of the Tinseltown had graced the Diwali celebrations at Jalsa. Giving a sneak peek of the décor at Jalsa, Big B had tweeted, “On this auspicious day and week of Deepawali... love and affection from our abode JALSA... and prayers for fulfilment, peace and prosperity.”

On October 29, 2019, Amitabh Bachchan posted some unseen pictures from the Diwali celebrations with his family including wife, Jaya Bachchan, son, Abhishek Bachchan, daughter-in-law, Aishwarya Rai Bachchan and granddaughter, Aaradhya Bachchan, at their home, Jalsa. Sharing the pictures, wherein the Bachchan family could be seen lighting up the diyas, Amitabh Bachchan wrote, "On the auspicious festive week our love and prayers to all... Iss shubh avsar par humari shubhkamnayein." 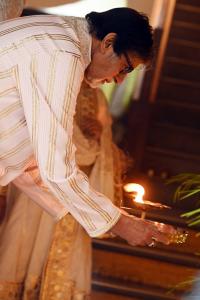 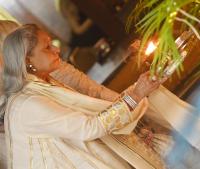 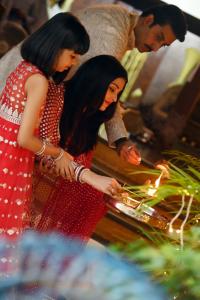 On Diwali 2019, Amitabh Bachchan had taken his fans down the memory lane and had shared two pictures from the Diwali celebrations with his little girl, Shweta Bachchan Nanda in the frame. One black-and-white picture had Jaya ji, Shweta and him burning the phooljhadi and the other picture had him and Shweta lighting up the sparkler. Big B had captioned it as "Diwali greetings to all... peace prosperity and fulfilment. (please accept this as a response to all the greetings received; it will be impossible to reply to each individually)." (Also Read: Priya Sachdev Kapur Celebrates First Diwali With Azarias, Step-Children And Daughter's Bond Is Great) 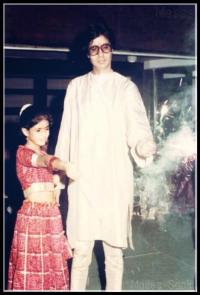 Another family picture of the Bachchans had gone viral on social media from the Diwali celebrations wherein we can see proud seniors, Amitabh Bachchan and Jaya Bachchan with their children, Shweta Bachchan Nanda and Abhishek Bachchan, son-in-law and daughter-in-law, Nikhil Nanda and Aishwarya Rai Bachchan, grandchildren, Navya Naveli Nanda, Agastya Nanda and Aaradhya Bachchan. Jaya ji, Shweta, Navya and Agastya had opted for Abu Jani and Sandeep Khosla ensembles for the Diwali bash. While Aishwarya, Shweta and Aaradhya had twinned in red, Nikhil had opted for a black suit and the rest of the family had looked like a vision in white. 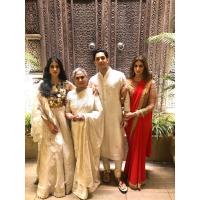 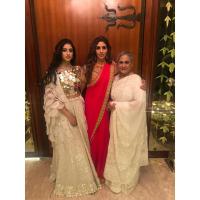 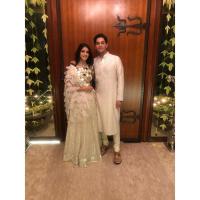 As per a Mid-Day report, Aishwarya Rai Bachchan’s manager, Archana Sadanand’s lehenga had caught fire at the Diwali party and it was Shah Rukh Khan, who had saved her from the same. A source had shared, “Archana was with her daughter in the courtyard when her lehenga caught fire. Those around were stunned and didn’t know what to do. Shah Rukh had the presence of mind, rushed to Archana, and put out the fire. He, too, sustained minor burns while dousing the flames with a jacket. His only thought was to put out the fire.”

We just love how the Diwali pictures and videos are still popping up on our social media timelines! What about you?