The power couple, Deepika Padukone and Ranveer Singh have put an end to their separation rumours in the most adorable way. Check it out!

Be it in reel life or in real life, Bollywood stars have always persuaded us to believe in love. From cutesy PDA moments to mushy romance, B-town celeb couples know how to swoon our hearts. And among all the adorable couples of Bollywood, Deepika Padukone and Ranveer Singh have managed to rule over millions of hearts with their sizzling chemistry. Together, the couple has entertained us with blockbuster films like Padmaavat, 83, Bajirao Mastani, and more.

For the unversed, Deepika and Ranveer had fallen in love on the sets of their first film together, Goliyon Ki Raasleela, Ram-Leela. And after dating for almost  6 years, the couple entered into marital bliss in 2018. With each passing day, their bond and love are getting stronger, however, for the past few days, their separation rumours have been going rounds on the internet.

No Gold And Platinum But Only Silver Jewellery In Deepika Padukone And Ranveer Singh's Wedding? 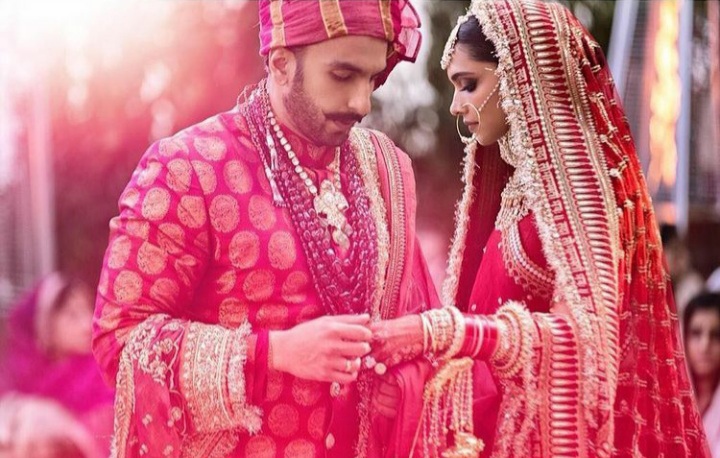 On September 30, 2022, Ranveer Singh took to his Instagram handle and shared a series of pictures of himself. In the pictures, the Rocky Aur Rani Ki Prem Kahani actor looked dapper in a pink-coloured co-ord set paired with a pair of matching sneakers. Soon after Ranveer shared the post, his fans and friends from the industry flooded the comment section with some cutesy responses. However, what caught our attention was his wifey, Deepika Padukone, who could not hold back from commenting on his post. Reacting to Ranveer's picture, the Piku actress wrote. "Edible!" whereas the former replied to her comment with emojis. Their love-filled conversation in the comment section is enough to put a fullstop to their separation rumours and show the magnetic chemistry that they share. Meanwhile, a few days ago, internet was flooded with rumours about the rift between Deepika and Ranveer. The reports had claimed that everything was not well between DeepVeer, and the couple would soon part ways. For the unversed, it all started when a Twitter user had shared a statement hinting at troubles in Ranveer and Deepika's relationship, and his tweet had started going viral on social media. This news had worried the couple's fans, and they were confused if the speculation was true. The tweet could be read as:

"BREAKING! Everything is not OK between #DeepikaPadukone and #RanveerSingh!!!"

You May Like: Charu Asopa's Daughter, Ziana Turns Eleven-Month-Old, Dons A Red 'Churidaar' Set In A Happy Video

Earlier, during an event, Ranveer Singh had opened up about his relationship with Deepika and put an end to all the ongoing speculations. He had shared that he and Deepika have been together for ten years now and added that he holds immense respect and love for her. Talking about the same, Ranveer had mentioned:

"Touchwood…We met and started dating in 2012… so 2022 is ten years of me and Deepika. I have nothing but the utmost respect for her and I admire her a lot. I have learnt a lot from her in my personal life too. There is a sweet surprise for everyone. You guys will see us together very soon. She is one of the best things that has happened to me and am so grateful for her in my life." We love how Ranveer and Deepika are getting back at their separation rumours.