South superstar, Allu Arjun's wife, Sneha Reddy and kids, Arya and Ayaan planted saplings in their garden is the kind of family goals we need to save this planet. Take a look!

The South actors are now extremely popular in Hindi-speaking regions of the entire nation as their popularity is getting bigger and bigger. But there’s one superstar, who is one of the first from the South industry to taste this nation-wide fame. As we all know that there aren’t a lot of Telugu actors, who are as famous as the superstar, Allu Arjun. The actor was first seen when he was a small child in the film, Vijetha (1985) and later, had made his debut in Gangotri (2003). Since then, there has been no looking back for the actor in terms of success and fame. (Recommended Read: Paras Chhabra Gets Possessive As Alleged GF, Mahira Sharma Talks About Someone Calling Her Adorable)

Not just on the professional front but in terms of his personal life too, Allu Arjun is blessed with a super-supporting life-partner and wife, Sneha Reddy, who never skips a moment to support his hubby. Sneha Reddy isn’t just a doting wife but is also a doting mommy of two too. And, a glimpse of the same can be seen in her recent Instagram post. Scroll down to take a look! 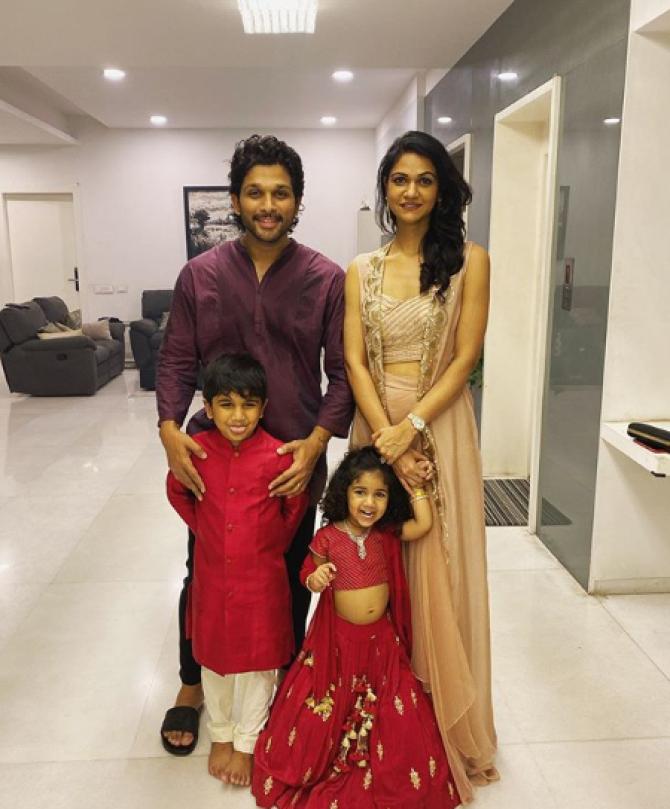 On July 27, 2020, popular South actor, Allu Arjun’s doting wife, Sneha Reddy took to her Instagram handle and posted some pictures with her kids, Ayaan and Arha from their planting saplings session. The doting mother was nominated by South’s legendary actor, Chiranjeevi’s daughter, Sushmita Konidela on Instagram. The ‘Green India Challenge’ is about planting saplings and taking care of the little plants and flowers that you have in your house or garden. In the pictures, we can see Sneha wearing a simple white kurta, while her little son, Ayaan, looked handsome in his white t-shirt and blue denim shorts. Talking about her daughter, Arha, the little angel was looking beautiful in her blue outfit. Along with the pictures, Sneha wrote a caption in which, she has nominated her husband and other friends for this same challenge, and it can be read as “Thanks @sushmitakonidela for nominating me #greenindiachallenge #harahaitohbharahai I nominate @alluarjunonline @rsingareddy @meghanajrao.” Take a look. 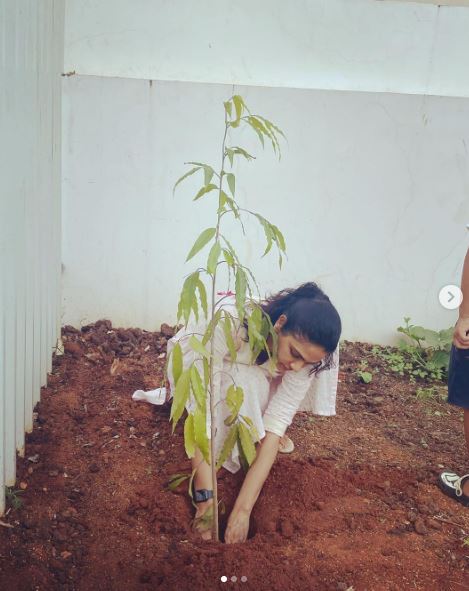 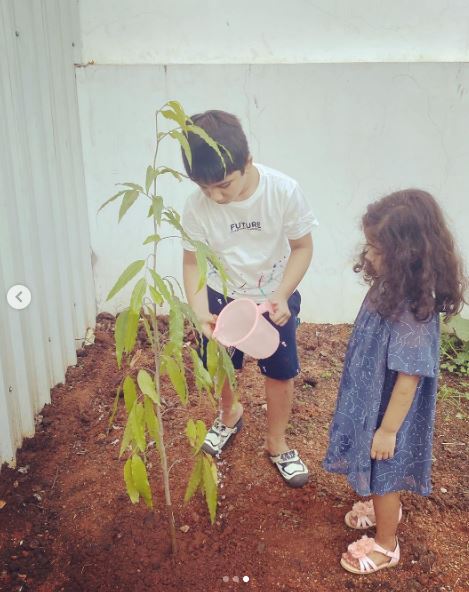 For the uninitiated, Allu Arjun had gotten married to his long-term girlfriend, Sneha Reddy on March 6, 2011, and the couple were blessed with a baby boy, Allu Ayaan on April 3, 2014. After two years, on November 21, 2016, the couple had embraced parenthood for the second time and had welcomed a baby girl, whom they had named, Allu Arha. We have seen many pictures, and cute videos of the whole family and the beautiful couple on their respective Instagram handles. (Don’t Miss: 'The Family Man' Fame, Priyamani Reveals How Husband, Mustafa Raj Supports Her After Their Marriage) 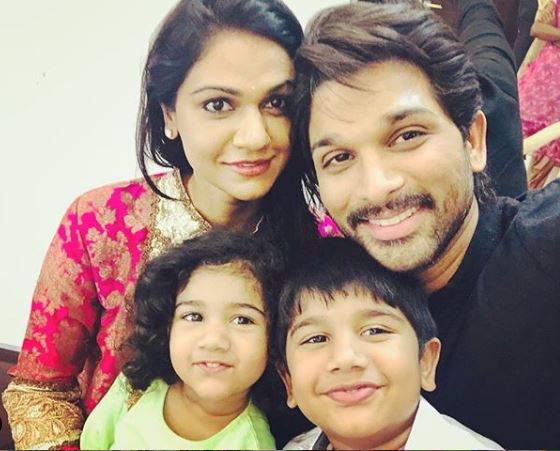 On March 3, 2020, Allu Arjun had taken to his Instagram handle and had shared a beautiful picture from his wedding diaries. In the photo, we could see the delightful smiles on the faces of Arjun and Sneha as the couple had looked stunning in their respective wedding outfits. The actor had written a sweet line at the bottom of their lovely picture that could be read as “9 years of marriage. Time is getting over fast. But love grows every day.” Along with this, Arjun had also posted a picture of his family in his Instagram stories and had thanked his wife for giving birth to their two little children, Ayaan and Arha. Take a look. 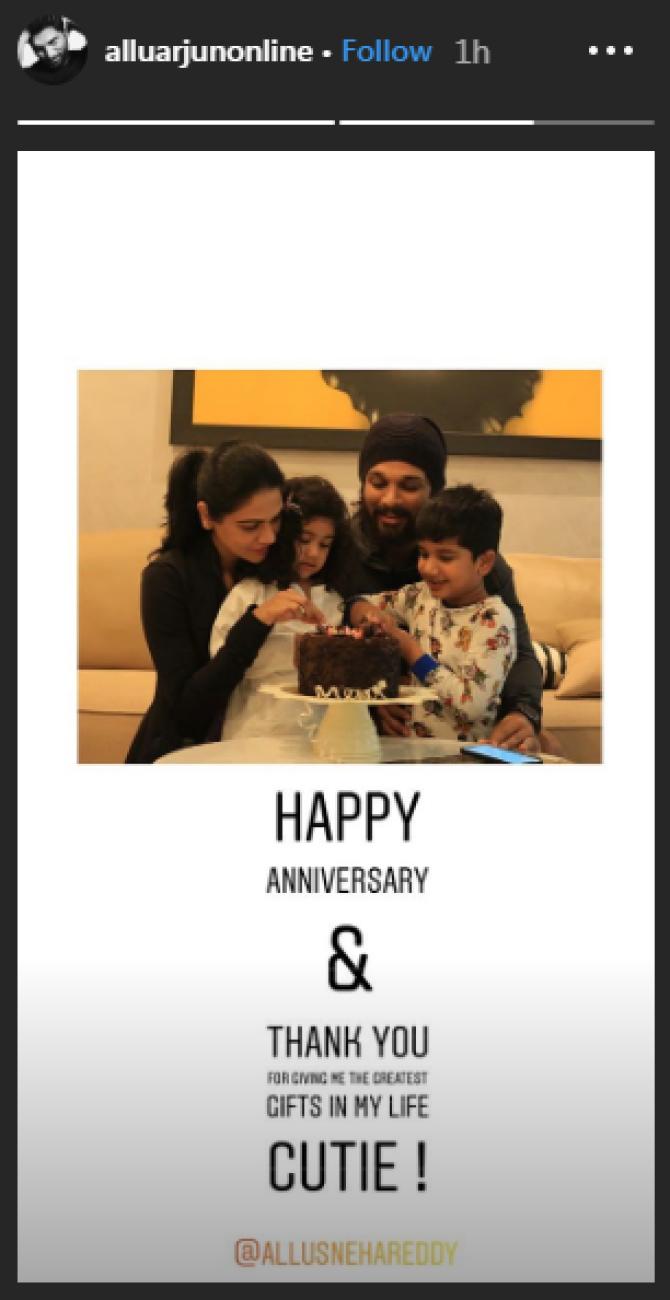 Well, giving an insight into the beautiful tale of their love story for the uninitiated ones, it was love at first sight for Allu Arjun, when he had met Sneha at one of his close friend’s wedding. The South actor was completely bowled by her beauty and had gotten introduced to her by their common friends. Both Arjun and Sneha had exchanged the numbers, and within no time, they had fallen madly in love with each other. After a long dating period, when Allu Arjun’s parents had approached Sneha’s parents, the proposal was accepted in just 5 minutes and rest as they say is history. (Also Read: Anushka Sharma Plays A 'Dumb Game' On Instagram, Hubby Virat Kohli Captures Behind-The-Scenes Moment) Are you thinking of doing what Sneha and her kids are doing? Let us know!