Here are the tinsel town divas who had donned a Banarasi silk lehenga and had looked Majestic in their outfit.

Lehengas are on the top of a girl’s list when it’s about attending a friend’s wedding or her own. There’s a huge collection of lehengas in the market, but if you prefer something traditional looking, the Banarasi silk lehenga would be the perfect outfit. Banarasi lehengas stand out and showcase the century-old weave.

Moreover, it’s not just a traditional attire but also gives a royal look. Banarasi silk lehengas are not just ordinary silhouettes but are heirlooms. Bollywood celebrities have also styled themselves in the rich fabric for several occasions. Let's take a look at the B-town celebrities who opted for a Banarasi lehenga. 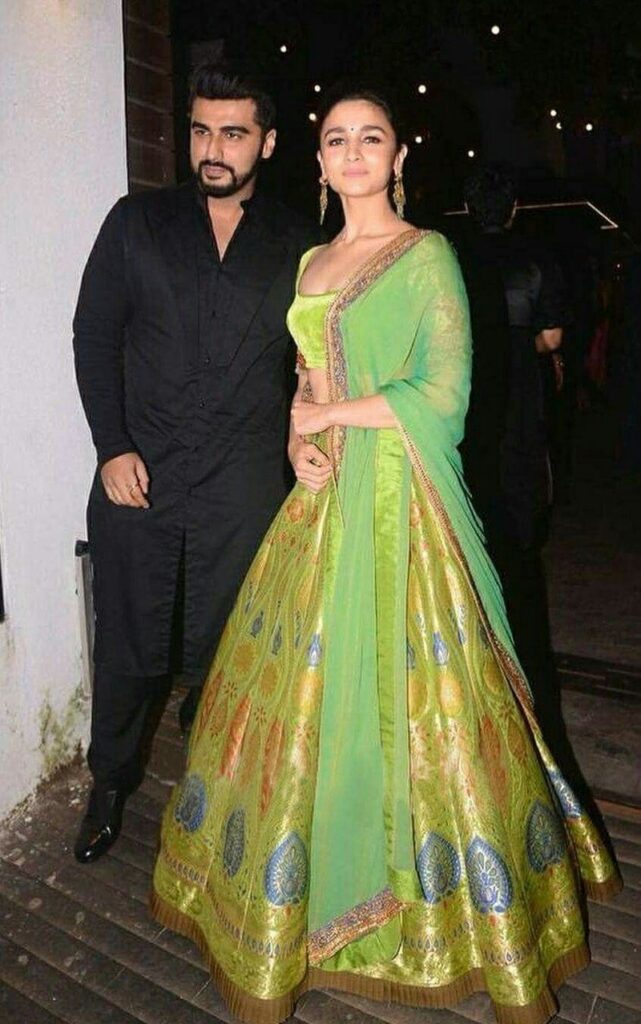 Alia Bhatt has won many hearts with her cute looks and superb acting skills. The Humpty Sharma Ki Dulhania actress looks stunning in whatsoever she wears. For a Diwali party, she was dressed in a green brocade lehenga, designed by the ace designer, Manish Malhotra. She had finished her look with a tied up bun and a pair of earrings. 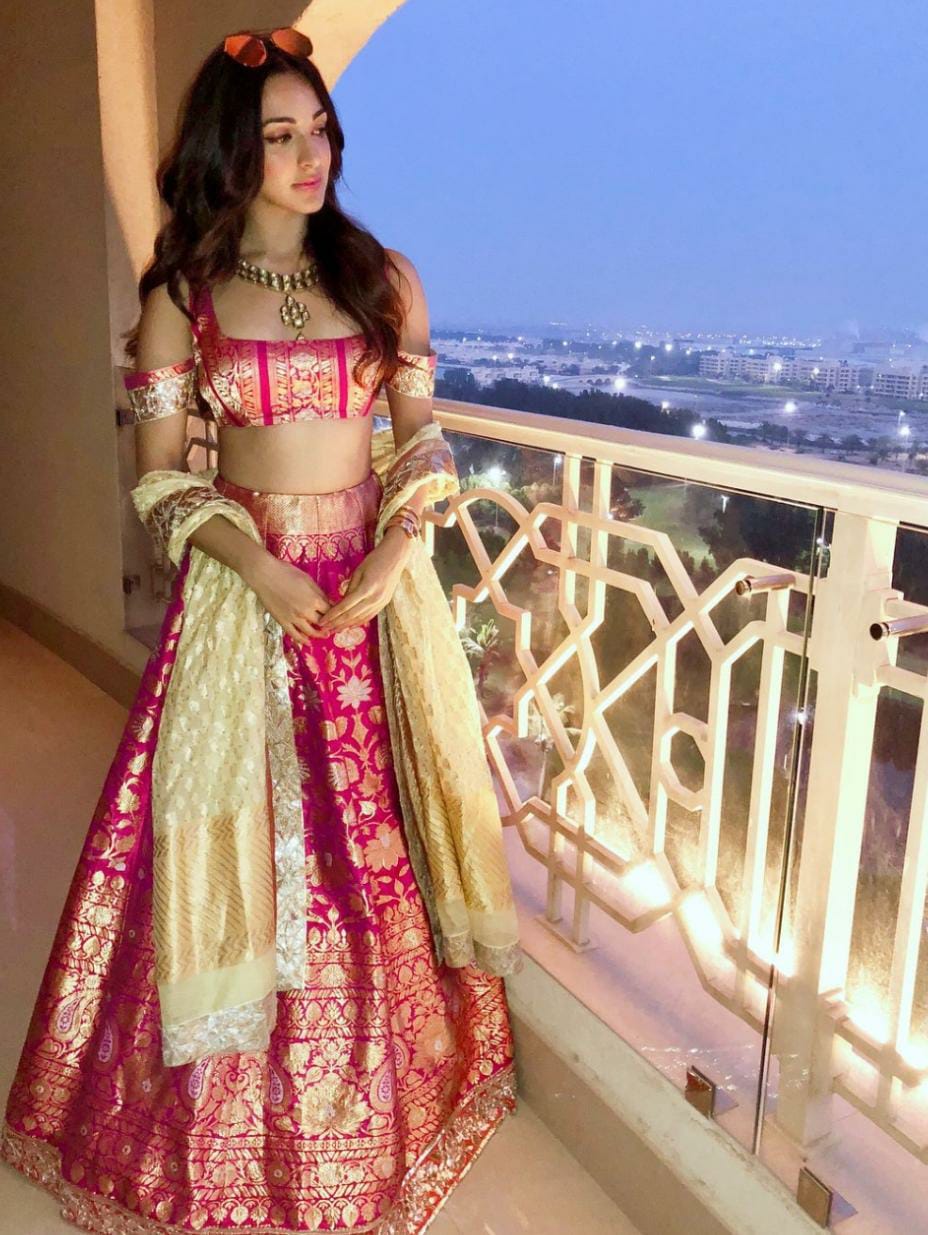 The Shershaah actress had donned a Fuschia-pink Manish Malhotra lehenga, for a wedding which she had attended in 2018. Her outfit had beautiful floral prints in golden colour, which she had paired with an off-shoulder blouse. Kiara had kept her look minimal with a kundan choker. 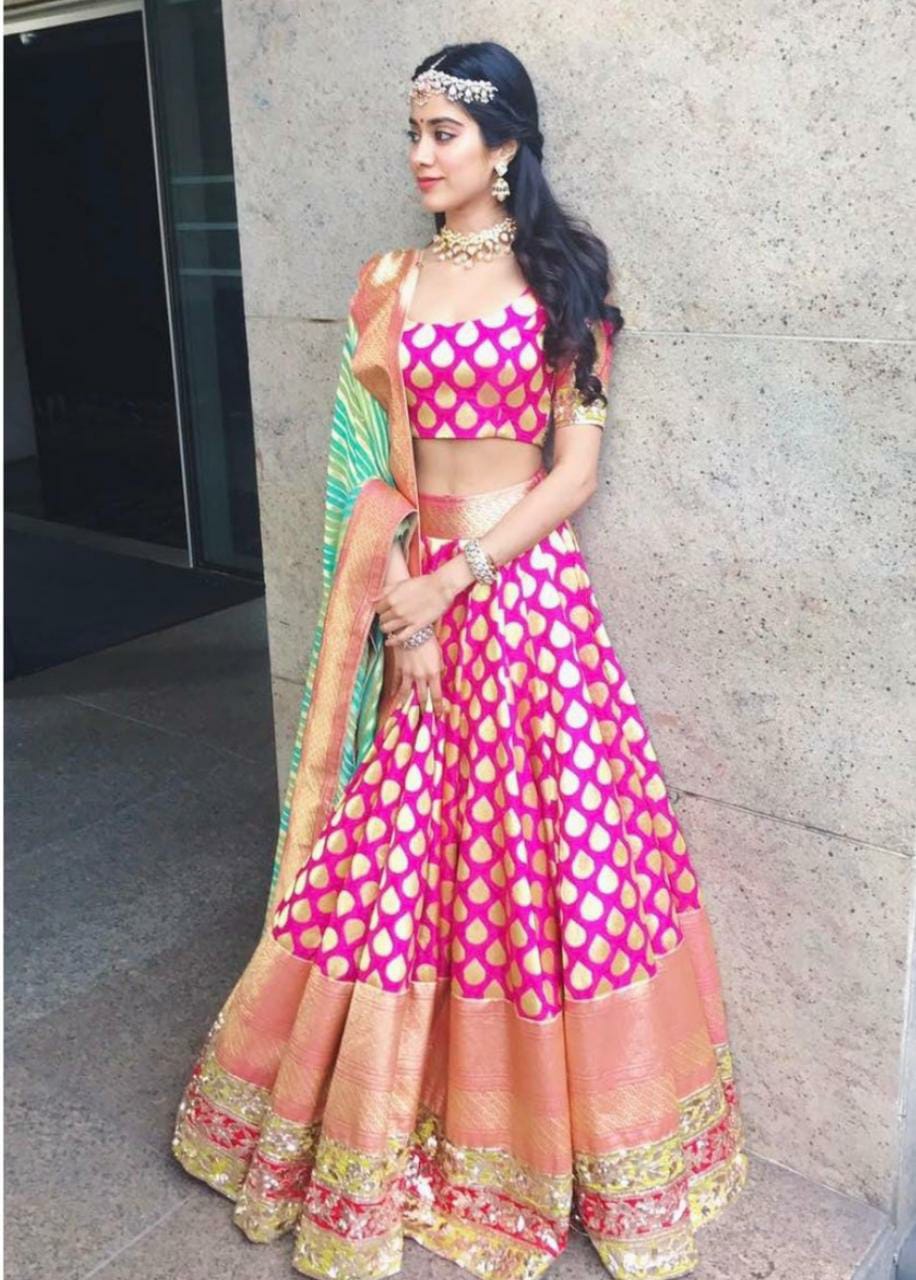 Janhvi Kapoor had opted for a hot pink Banarsi silk lehenga for a wedding, with a matching choli and a blue-striped dupatta. The outfit was designed by Manish Malhotra, which had featured a gold border in the hem with floral motifs. She had finished her look with a matha-patti and a choker, with her hair kept open. 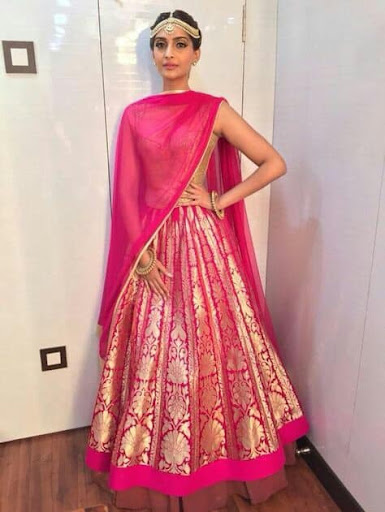 Sonam Kapoor is a Bollywood fashion icon and has often claimed that her style sense is unique. To attend the Life OK Screen Awards, Sonam had picked a hot pink Banarasi lehenga and choli to make a style statement. The outfit had a heavy brocade structure that had given the lehenga a striking flair. 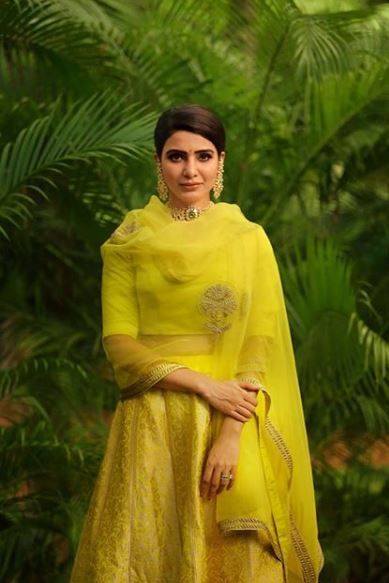 For the launch event of one of her films, Samantha Ruth Prabhu had worn a bright yellow lehenga by Raw Mango. Her lehenga was subtle and had golden zari work all over it. To complete her look, she had styled her outfit with a pearl choker and heavy gold earrings. She had looked beautiful in her Banarasi lehenga. Aditi Rao Hydari had made her presence at Virat Kholi and Anushka Sharma’s wedding reception, wearing a royal blue Banarasi silk lehenga with an off-shoulder blouse. The skirt had featured intricate brocade floral motifs in green, orange and yellow. Aditi had accentuated her look with a ponytail and a diamond choker necklace. 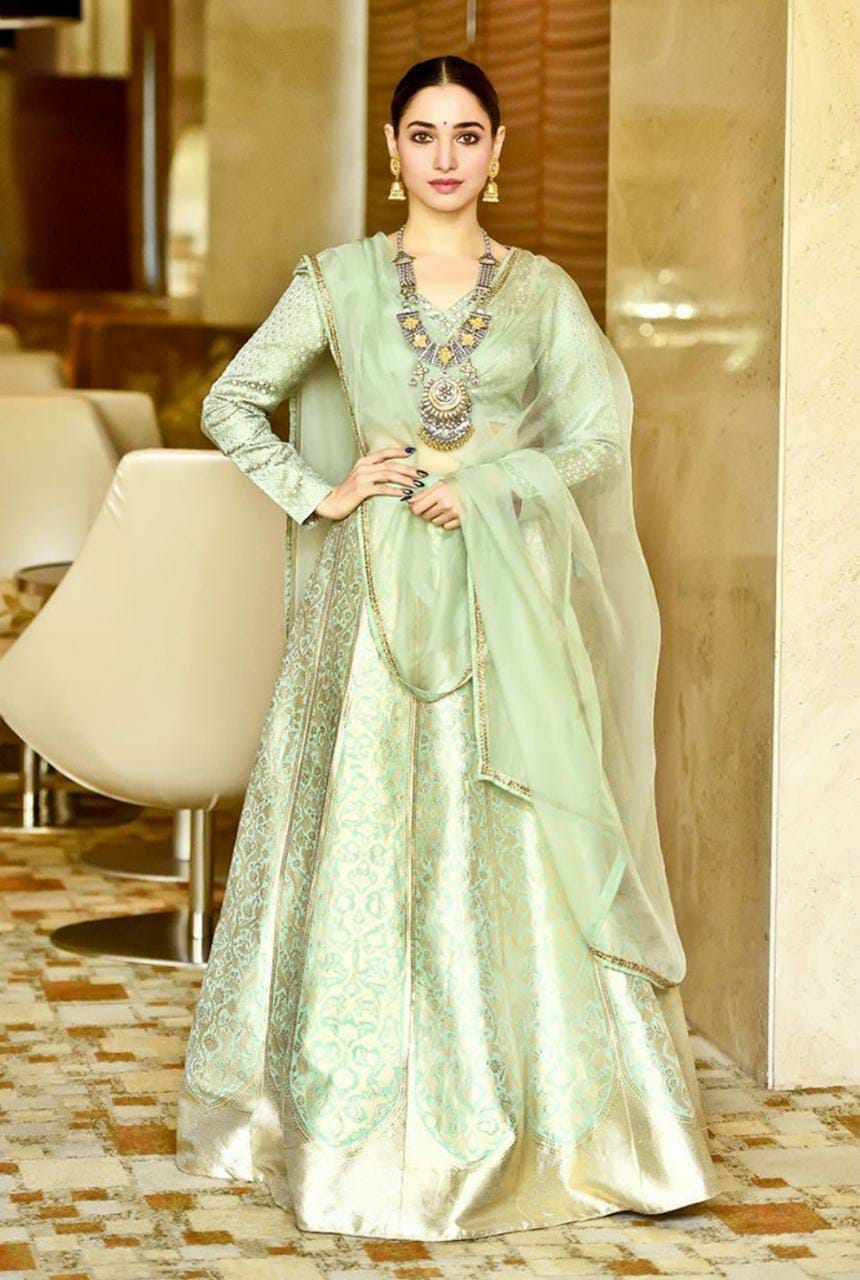 The actress had looked regal in her mint green lehenga and a full-sleeve blouse by Raw Mango. The outfit had golden zari work and a thin gold border on the sheer organza dupatta. To complete her look, she had accessorised it with a heavy necklace and a pair of jhumkas. Finally, she had summed it up with a hair bun which was decorated with beautiful white flowers. 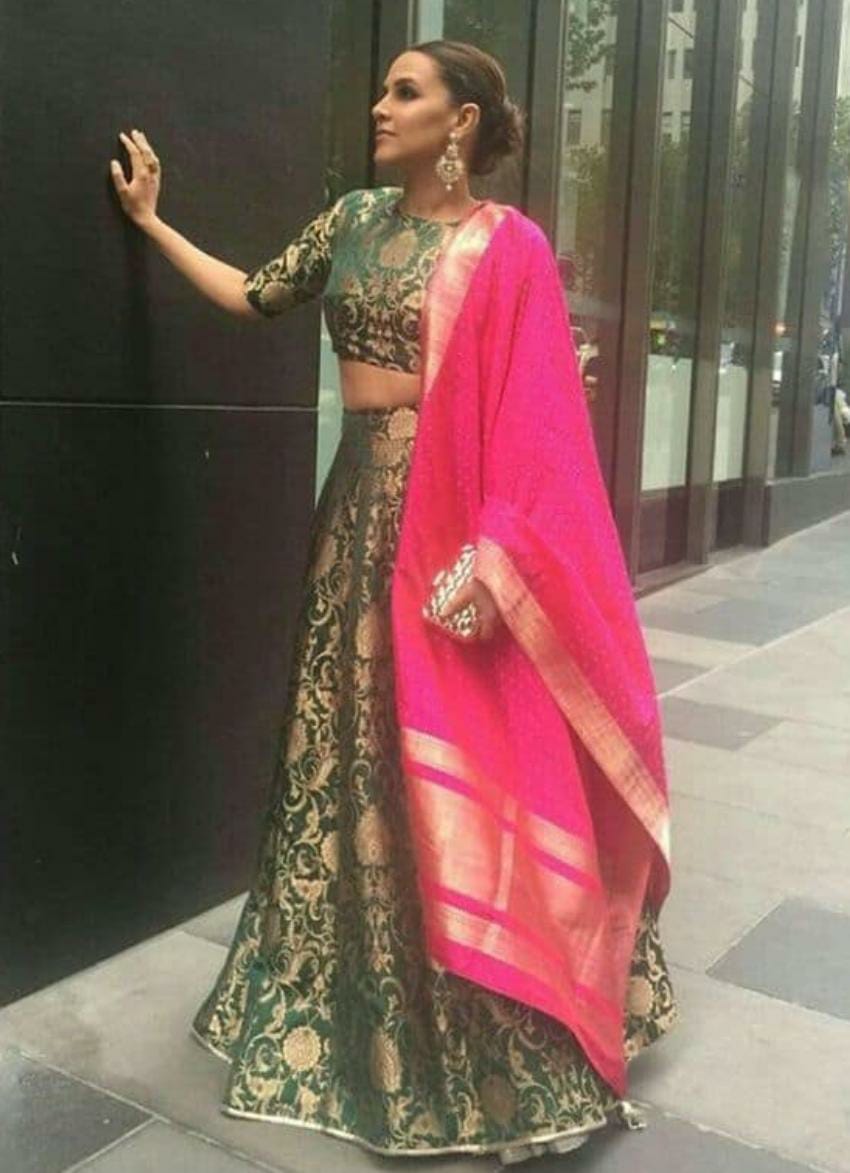 Neha Dhupia often makes her appearance in western clothes and is hardly spotted in ethnic outfits. However, for the Miss India global competition held in Melbourne, Neha had donned a green Banarasi lehenga which she had paired with a rani pink dupatta. The actress finished her look with heavy earrings, along with a golden clutch bag. 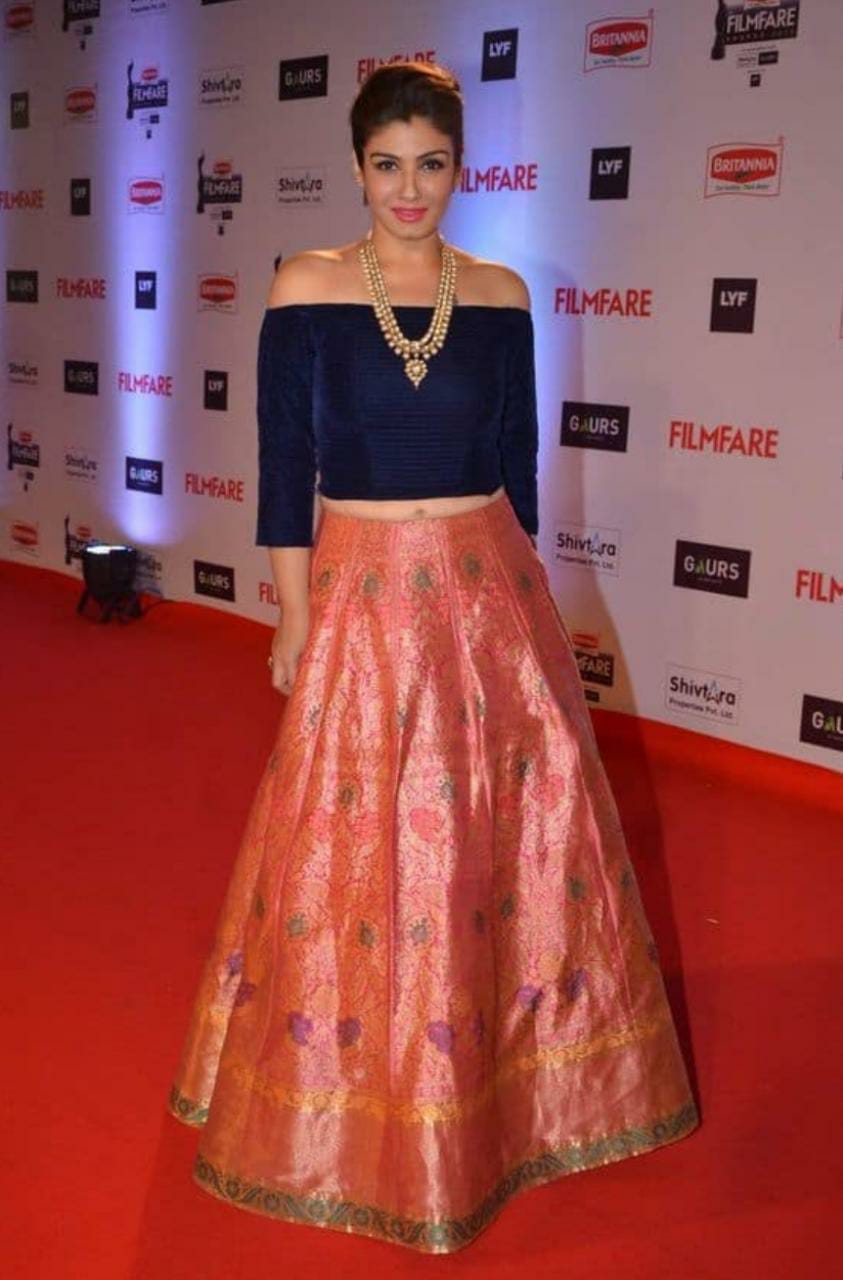 The everlasting beauty, Raveena Tandon, looks flawless in all her outfits. The actress had flaunted her Banarasi lehenga-choli look, which she had picked from the designer, Manish Malhotra. She had paired her pink and peach Banarasi skirt with a dark-blue off-shoulder choli, which had added a modern look to her style. 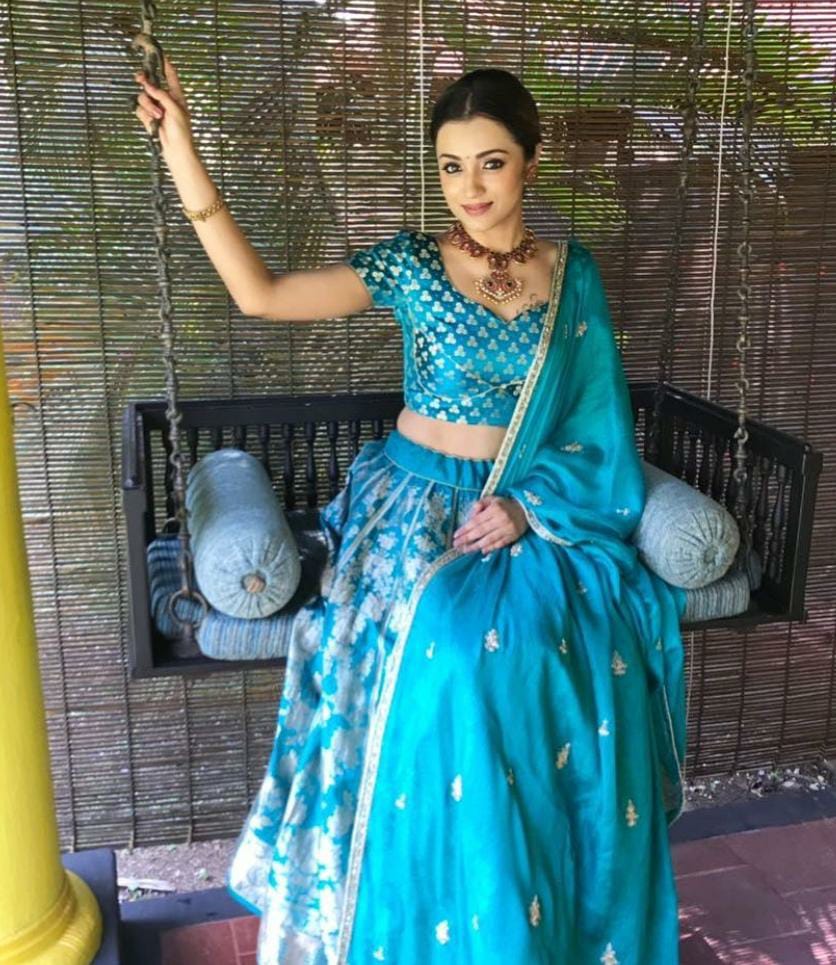 The famous South Indian actress, Trisha Krishnan slew her look in an elegant Banarasi lehenga. Her outfit had consisted of a teal-blue lehenga, half-sleeve choli and a dupatta. The gorgeous outfit had floral motifs designed on it.

Don’t all these actresses look regal in their outfits! Which one is your favourite Banarasi silk lehenga out of the above? Drop your views in the comment section.

Read Next: Isha Ambani's 6 Expensive Sarees Which She Styled In Her Own Unique Ways