We all were waiting to see how Alia Bhatt would wish her boyfriend, Ranbir Kapoor on his birthday and that has finally happened! Scroll down and find out!

How we love birthdays (well exceptions do exist though)! This special day is a reminder of the fact that our moms took great pain to bring us into this world and we should value every second of this one life that has been gifted to us. Talking about partners celebrating one another’s birthdays in here, we bet the other one doesn’t leave any efforts to make it a day to remember for the birthday girl/boy. And we have already seen an instance of how special Alia Bhatt made it for her ‘one true love’, Ranbir Kapoor on his birthday last night. (Do Read: Ranbir Kapoor's Birthday Party: Ex-GF Deepika, Ranveer And Industry Friends Join The Celebration)

Ranbir Kapoor is celebrating his 37th birthday today (September 28, 2019) and his birthday eve was a moment of stupendous galore. Alia had made it super-special for her beau and co-hosted a birthday bash with Ayan Mukerji for Ranbir and invited many A-listed B-town stars. Out of a few pictures from Ranbir’s birthday bash going viral on the internet, it was an adorable snap of Alia sitting on her boyfriend’s lap, with soon-to-be sasu maa, Neetu Kapoor by their side, that had totally made our day! Here’s the image: And while we all were looking forward to ‘that one wish’ the most, this pop up on our Instagram feed made us go gaga! Alia Bhatt posted a solo picture of her boyfriend, Ranbir Kapoor, from what looked like their Kenyan holiday when they had gone on a jungle safari. Ranbir looked serene in a black polo t-shirt, glasses tucked onto his t-shirt, an off-white hat and binoculars in his hand as he gazed at a distance. Alia’s simple and cute wish for her boyfriend can be read as “happy birthday you.” Ranbir’s soon-to-be mom-in-law, Soni Razdan too, wished him by writing “Happy Birthday!” as one of the comments. Here you go: 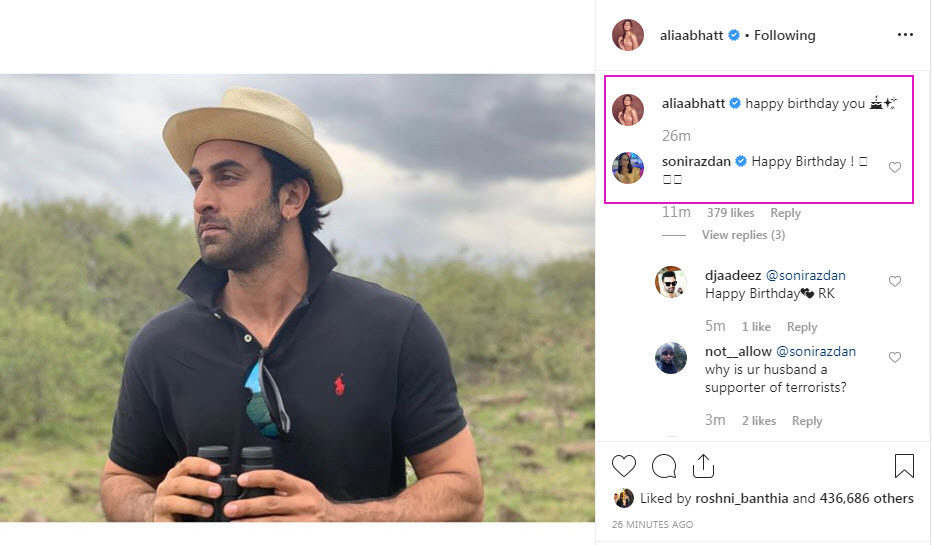 Isn’t it great? Last year too, when Alia Bhatt and Ranbir Kapoor were ‘just a rumour’, the Raazi actress had posted a heartfelt wish for her boyfriend. For his birthday, Alia had taken to Instagram and yet again, had posted a beautiful solo picture of Ranbir, where his eyes were all closed, as he let out a peal of heartfelt laughter! What had looked like a picture from a holiday, Alia had posted three words which had sufficed what he means to her. Sharing the picture, she had captioned, “Happy Birthday Sunshine”. (Must Read: Neetu Kapoor Reveals What Fills Her Heart With Joy On Ranbir Kapoor's Birthday, Posts Heartfelt Wish) To give you another update about Ranbir Kapoor’s birthday last year, Neetu Kapoor had taken  to Instagram to post heartfelt birthday wishes for son, Ranbir Kapoor and nanad Rima Jain, whose birthdays clash with one another. What was notable in the picture was that it had two lovebirds and two future-in-laws together in one frame! The picture was indeed note-worthy but an update about them was even more amazing! An insider had told online portal BollywoodLife that the star mommies were discussing Alia and Ranbir’s marriage over the latter’s birthday dinner! Yes, a source had evealed to the same portal, “Alia is in a great phase of her life right now. She is in love and they both are sure of each other. Marriage is certainly on the cards but it won't happen before 2020." And now, we can’t wait for 2020 to come by! Alia Bhatt and Ranbir Kapoor are working on Ayan Mukerji’s mammoth project together, Brahmastra and we can’t wait to witness the magic of their chemistry soon. The movie was supposed to release this year but has been pushed to 2020, the same year which is speculated to mark some ‘new innings’ in Alia and Ranbir’s life. As per a Mumbai Mirror report, Ranbir has apparently formally met his ladylove, Alia’s father, Mahesh Bhatt to ask for his daughter’s hand for marriage! The report also had it that a few happy tears had apparently been shed when the same was happening. 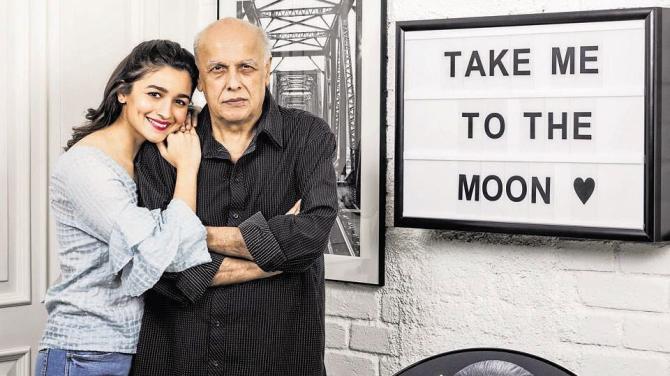 As much as Alia Bhatt and Ranbir Kapoor have always denied their wedding rumours, reports have been rife that the Kapoor khaandaan was only waiting for Rishi Kapoor’s recovery and for him to come back so that Alia and Ranbir’s wedding can take place. And now that has happened, there might be a pop-up about Alia and Ranbir’s marriage happening sometime soon! In similar lines, don’t you want to know which designer lehenga will Alia don on her special day? As per a SpotboyE report that had come sometime back, the 26-year-old will be a Sabyasachi Mukherjee bride, quite like her contemporaries for her upcoming rumoured 2020 wedding. As per the report, Alia and Ranbir are planning to tie the knot in the first half of the year and she has apparently had a meeting too with the ace designer about her wedding dress! (Also Read: Taimur Ali Khan Is The Most Obedient Student In His Classroom As He Studies With Friends And Teacher) Going by the latest advancements in Alia and Ranbir’s life, it will not be wrong to predict that this might be the very last birthday for them as a bachelor (*wink wink*)! And how we hope this prediction comes true!