Ajay Devgn Posts A Reminder Ahead Of His Wedding Anniversary With Kajol, It Is Every Husband Ever

Ajay Devgn shared a collage of him and his wife, Kajol, correcting him when he wrongly guessed their wedding anniversary date and set a reminder of the same two days ahead of his anniversary.

The most adored couple of the Bollywood industry, Kajol and Ajay Devgn, is the epitome of true love. Although on one side, Kajol is chulbuli by nature, her handsome husband, Ajay, is more of a serious personality. And as we know, 'opposites attract', the much-in-love couple is an inspiration to all with their merrily ever-after life. The duo had tied the marital knot on February 24, 1999, and are blessed with two kids, a beautiful daughter, Nysa Devgn and a son, Yug Devgn.

The hot-and-sweet couple, Kajol and Ajay Devgn are always loved for their mushy posts for each other on their respective social media handles and for their romantic banters during their public appearances. On August 5, 2021, Kajol had turned a year older and taking to his IG handle, her husband, Ajay posted a cutesy picture with her to wish her. Along with the picture, the loving hubby had written:

Kajol Pens An Appreciation Note For Hubby, Ajay Devgn As He Completes 30 Years In The Film Industry

"You have managed to bring a smile to my face for the longest Time now...Happy birthday dearest Kajol; will try to make it as special as you are @kajol." 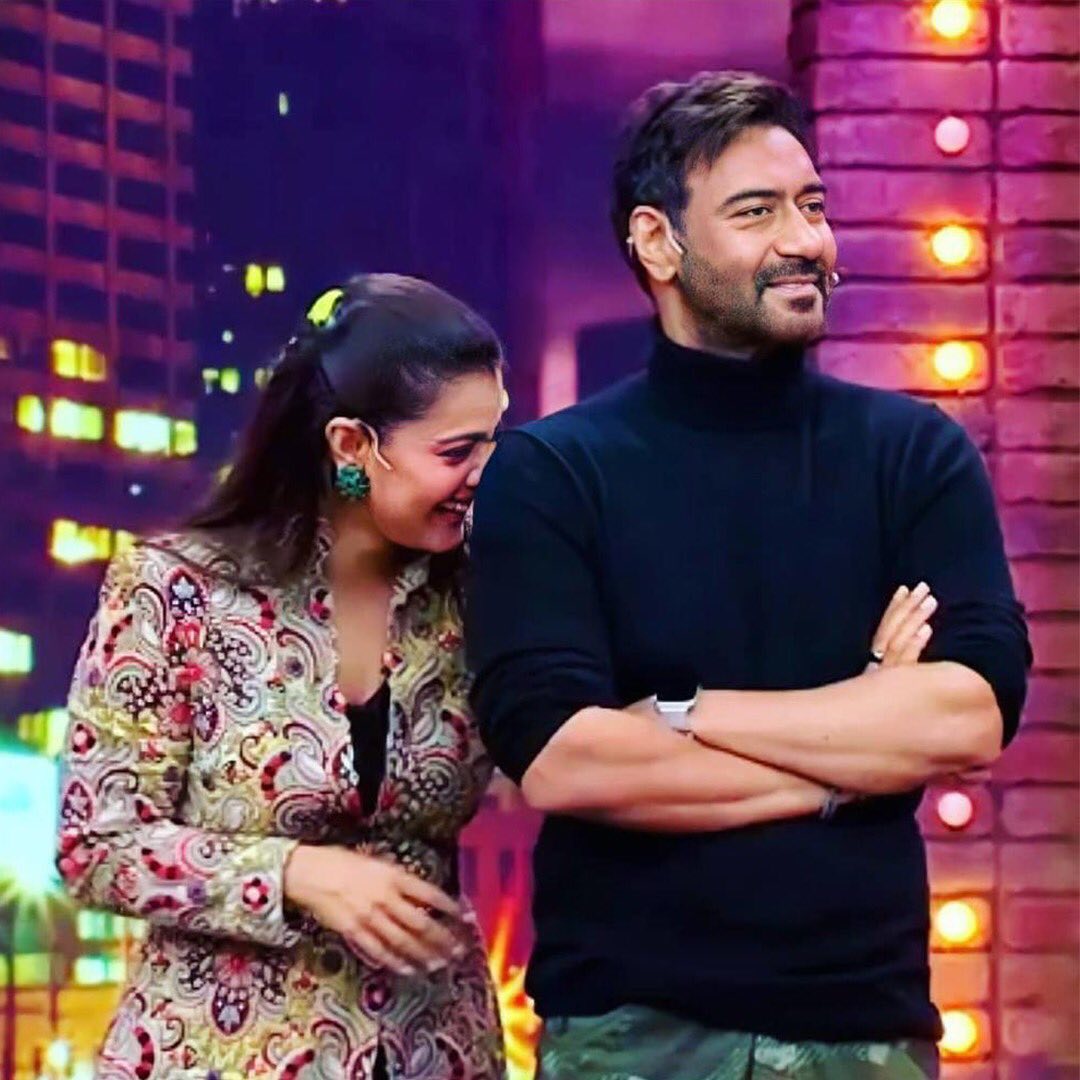 A few hours ago, Ajay Devgn took to his Instagram handle and shared a collage of two pictures with his wife, Kajol, ahead of their wedding anniversary. The picture consisted of snippets from their visit to the popular chat show, Koffee With Karan. It was during the 'Time Out' session when Ajay was asked about his wedding anniversary date, he had fumbled and wrongly guessed the date as of February 22. To this, his wife, Kajol, had interrupted and had mentioned the actual date that is February 24. Making this as an alarm for this year, Ajay posted the picture collage and wrote in the caption: Ajay's post was soon poured with comments from his fans, while some showered love, some wished the couple in advance, on the other side, some even dropped hilarious thoughts. One user wrote, "Sir, you need to make up for this big time for the rest of your life!" another user commented, "@kajol mam be like- ye dar hona chahye", followed by a laughing emoji and many more. Ajay also shared this post on his IG stories with a caption which can be read as "ISS BAR NAHI BHULOONGA", and added an alarm clock. 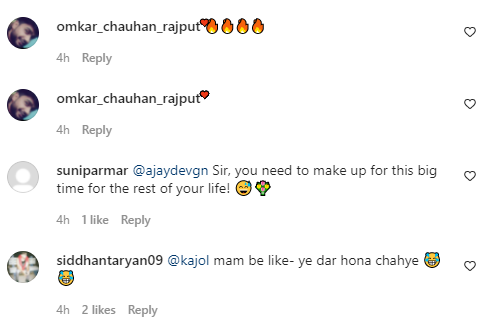 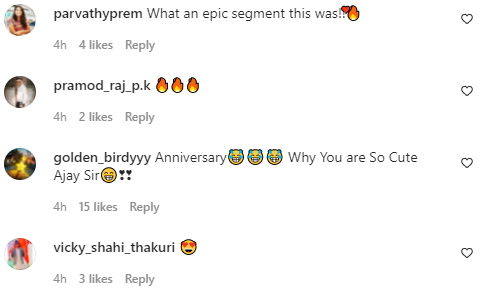 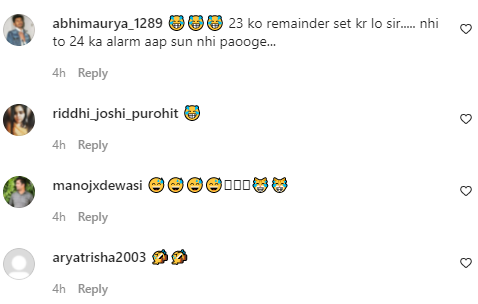 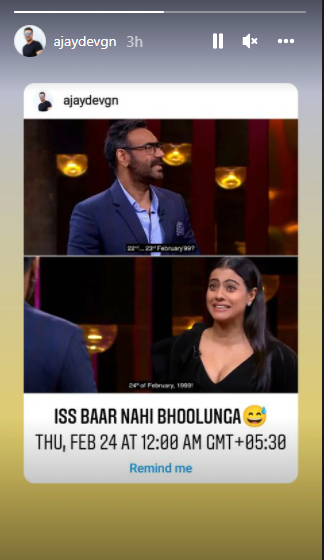 On November 25, 2018, when the show's first promo was released, Ajay complained about Kajol taking 3 hours to correct her pictures to post on Instagram. He had shared, "The problem is not clicking the picture, the problem is 3 hours they are only sitting and correcting their picture so that they can post it." Further teasing Kajol about her old age, he had added, "She has never done it in her life, budhape me aa ke, I don't know…" To which, Kajol had immediately intervened and had said:

Kajol is a loving wife, and along with it, she is also a hands-on mother, who leaves no stone unturned to take the best care of her kids, Nysa Devgan and Yug Devgan. On January 13, 2022, Kajol had taken to her IG handle and had shared a beautiful family picture with her kids and had wished her fans and followers on the auspicious day of Lohri. In the picture, everyone was seen smiling from ear to ear. Sharing the picture, Kajol had written:

"Mamas and babies and happies..#happylohri everyone !"

Isn't Ajay Devgn's reminder for his anniversary the most hilarious one? Let us know. 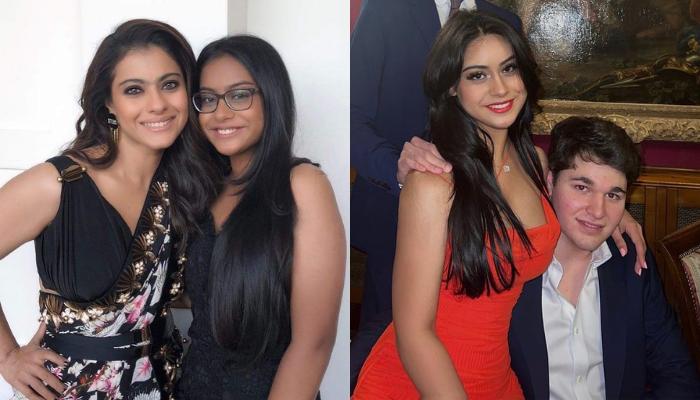 Kajol and Ajay Devgn’s daughter, Nysa Devgan has emerged as the new favourite fashion influencer of the millennials. Nysa is currently studying in Switzerland and keeps her life away from the media glare. Though the actress has no plans to walk in her parents' footsteps and enter Bollywood, the gorgeousness

Kajol Pens An Appreciation Note For Hubby, Ajay Devgn As He Completes 30 Years In The Film Industry