Aishwarya Rai Bachchan, Abhishek Bachchan and Aaradhya Bachchan were spotted at the Mumbai airport. The actress got trolled again for holding her daughter's hand.

The age of social media has given everyone a free pass to make quick judgements. Online trolling has become so normal that celebs are often a target of it. Aishwarya Rai Bachchan and her daughter, Aaradhya Bachchan, are the favourite targets of trollers as they often deal with their cringe remarks. From facing lewd remarks for being inseparable to dealing with trolling for anything under the roof, Aishwarya and Aaradhya have sure grown thick-skinned now. The gorgeous mommy-daughter duo again became a target of trolls.

For the unversed, Abhishek Bachchan had proposed to Aishwarya Rai Bachchan formally in New York with a fake ring from the sets for their film, Guru. Later, they had gone to Mumbai and had exchanged the rings officially on January 14, 2007. On April 20, 2007, Aishwarya and Abhishek had tied the knot, and four years later, in 2011, they had welcomed a baby girl, Aaradhya Bachchan. While Aishwarya Rai Bachchan’s love for her daughter, Aaradhya Bachchan, is unconditional, she is often trolled for the same. A few hours back, Aishwarya, Aaradhya and Abhishek Bachchan were spotted at the Mumbai airport as the star couples, along with their daughter were leaving for Paris for work commitments. Like always, Aishwarya was seen holding her daughter, Aaradhya’s hand, and it did not go down well with the netizens.

The netizens started trolling Aishwarya and Aaradhya for their love-filled gesture and the actress’ protective stride. While one user commented, “Her daughter is clingy she’s need let go of her daughter”, another user wrote, “As if someone is going to snatch her daughter! That is how she holds her hand. Really clingy.” One user also questioned Aishwarya for holding Aaradhya’s hand and commented, “Y still holding hands of her daughter.” One user also questioned, Aaradhya's bond with her father, Abhishek and commented, "I feel this girl has no bond with her father always holding on to her mother." 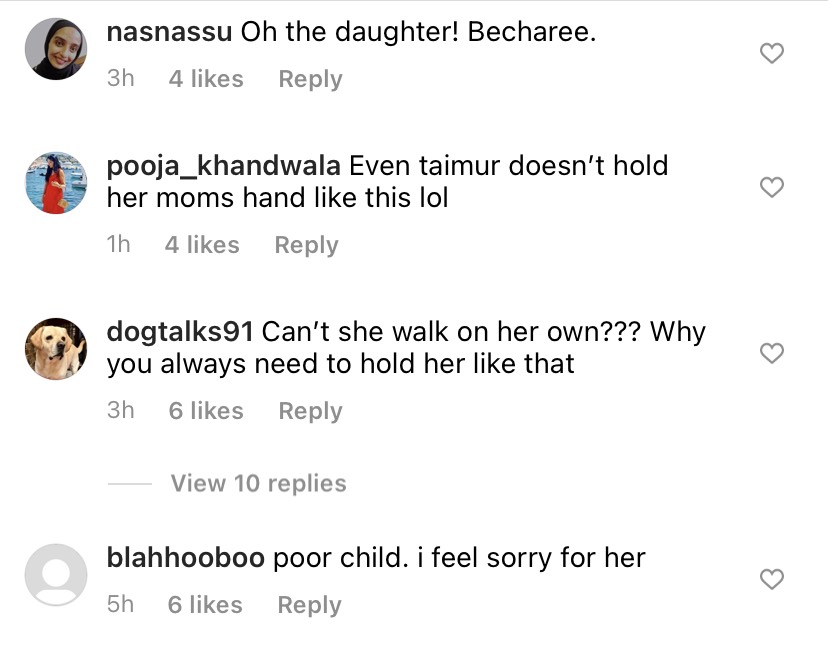 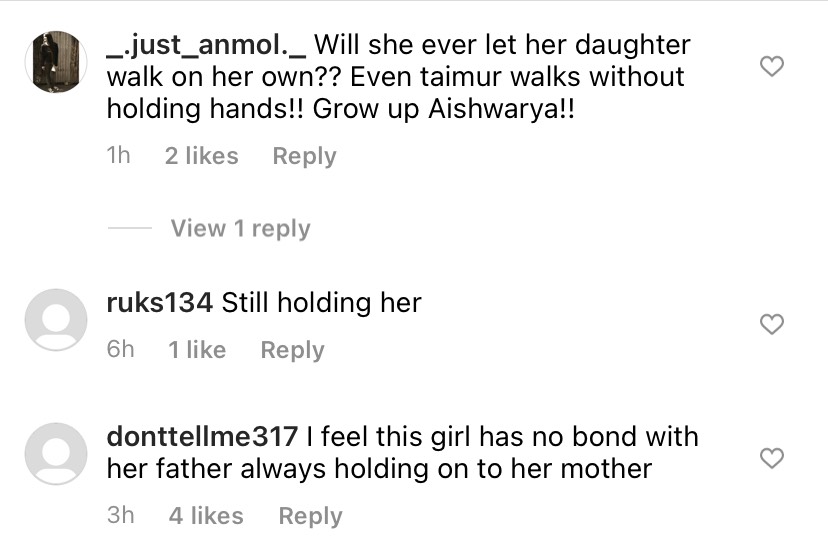 On August 23, 2021, Aishwarya Rai Bachchan and Aaradhya Bachchan were spotted at the airport as they were ready to board a private chartered flight. While Aishwarya was seen wearing an all-black attire, Aaradhya was seen wearing a floral jumpsuit with her signature hairband. While their glimpses were loved by their fans, a user had called it ‘rare’ as the actress was not holding her daughter’s hand this time.

A user had commented, “One of very rare pic where she doesn't hold her daughter arms.” Soon, Aishwarya and Aaradhya’s fans came out in their support. While one user had commented, “You have a problem with her holding her kid's hands?”, another one had written, “@mahesh_prakash_r I’m sorry since when did you know what a woman or mother’s role is? Did you carry the child or give birth to it NO so stay in your own lane and leave them alone!” Some had also commented on the way Aaradhya walked, calling her a disabled child. 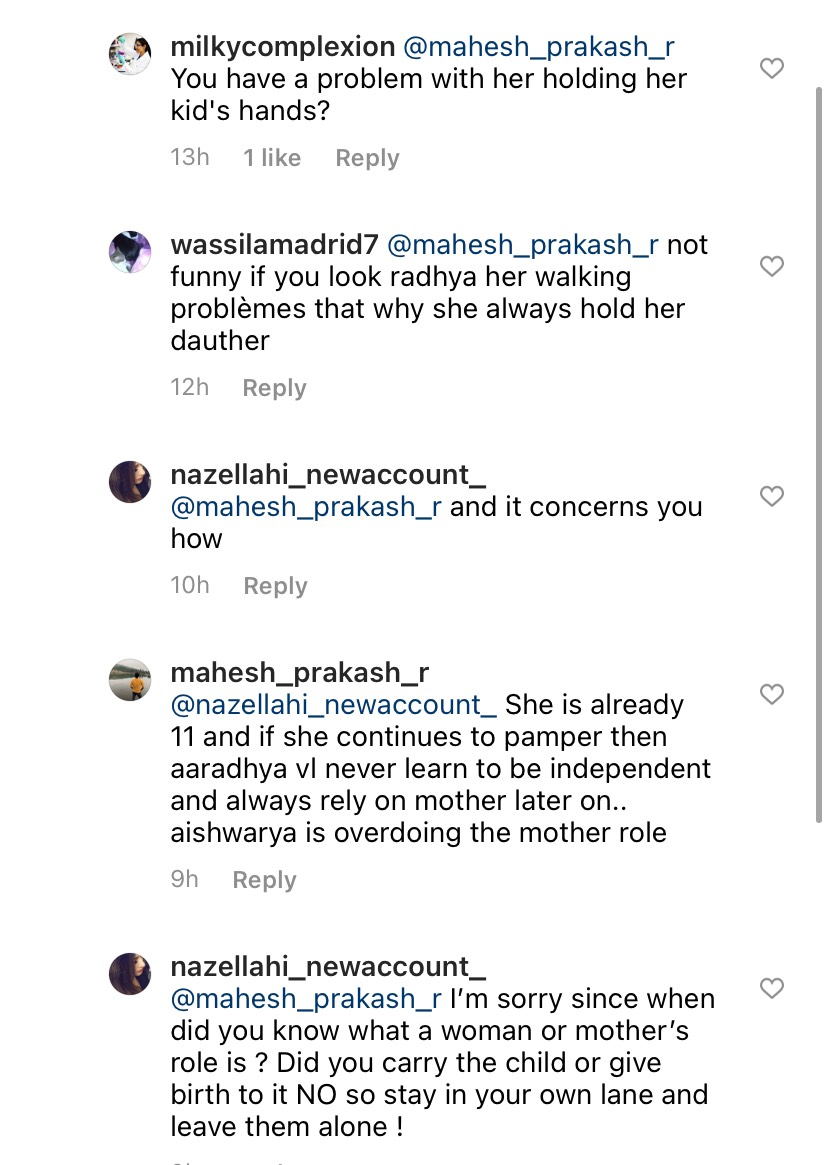 On February 16, 2021, Abhishek Bachchan and Aishwarya Rai Bachchan were spotted at the Mumbai airport with their daughter, Aaradhya Bachchan. The netizens were left furious and upset to see Aishwarya's over-protectiveness towards her daughter and had slammed her for not letting her step out of her shadow and handling things on her own. 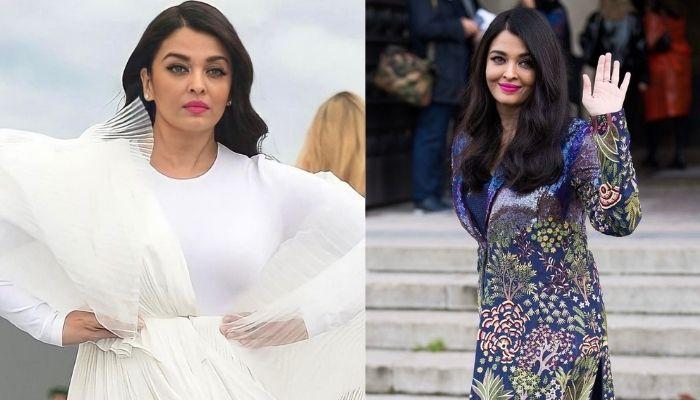