Veena Nagda is the go-to 'mehendi' artist for almost every celebrity bride. Known as Bollywood's 'Mehendi' Queen, she has become a popular face in Tinseltown in the last 40 years.

Over the years, we have seen many celebrity brides taking the plunge into their married lives with the man of their dreams. We have also witnessed the grandeur and liveliness of their wedding ceremonies. Right from haldi to mehendi and sangeet to the wedding and then the grand reception, these brides mesmerised us with beautiful pictures from all their gala events. While we praised their outfits, make-up, and even the decor, we never really appreciated the artists, who had made their wedding functions what they were!

One such person is mehendi artist, Veena Nagda, who has etched henna on the hands of many celeb brides and has made sure that their ceremonies become extra special. Veena had begun her career as a mehendi artist almost four decades ago and has now achieved celebrity status. Popularly known as Bollywood's Mehendi Queen, Veena is the fastest mehendi artist in the world. Be it a wedding or a film, Veena is the most sought after artist in Tinseltown. So, without doing any further ado, let's take a look at the celeb brides, who had got their hands etched with the intricate designs of Veena Nagda at their mehendi ceremony. 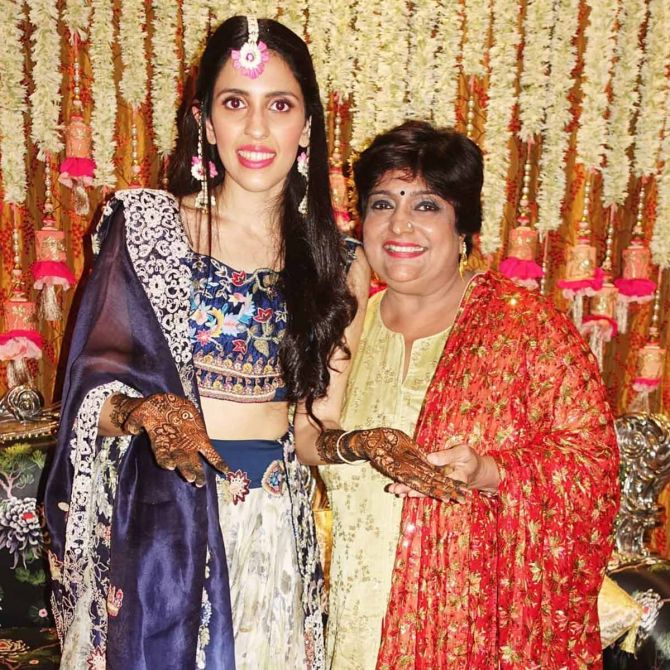 On March 09, 2019, the Ambanis' eldest son, Akash Ambani took the nuptial plunge with his childhood friend, Shloka Mehta. On their mehendi ceremony, Shloka had decked up in a unique blue lehenga by one of her favourite designers, Anamika Khanna. Her outfit had included a navy blue-coloured sleeveless blouse decorated with intricate threadwork floral motifs, an organza skirt in a greyish-beige shade and a lightweight ombre dupatta. The lehenga skirt was covered in floral and foliage designs and was perfect to make a statement look. The gorgeousness had flaunted her heavy mehendi design as she had posed for the camera with her mehendi artist, Veena Nagda. 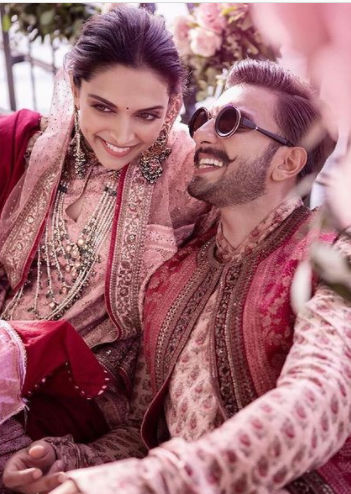 Deepika Padukone and Ranveer Singh had got married on November 14-15, 2018, in a dual ceremony at Lake Como in Italy. For the mehendi ceremony, the actress had donned a pastel pink salwar suit with embroidery all over it and had paired it with a matching dupatta and a red shawl which had golden embroidery. She had completed her look with minimal makeup and heavy jewellery. Earlier, in an interview with Zoom TV, Veena had recalled the compliment she had got from Ranveer Singh, while she had applied mehendi on Deepika's hands. She had shared:

"Ranveer Ji had said that ek queen ko dusri queen mehndi lagari hai, wo bhi Italy me. Wah kya baat hai. One day ghumna bhi rakha tha. I had told Deepika Ji after Yeh Jawani Hai Deewani that aapki shadi ki mehndi me lagaungi. When she was in Italy, she had called me and said that I had promised you and have called you."

Television actress, Ankita Lokhande had tied the knot with her then-boyfriend, Vicky Jain, on December 14, 2021. On her mehendi ceremony, the then-bride-to-be had looked gorgeous in rani pink-coloured ethnic wear as she had beamed with joy while posing for the camera. She had accentuated her look with a pair of statement earrings and a stone-studded neckpiece. Ankita couldn't stop dancing as her mehendi artist, Veena Nagda had applied henna on her hand, and the happiness was evident on her face. Moreover, her bridal glow was unmissable!

Katrina Kaif and Vicky Kaushal had tied the knot in a grand wedding held at Six Senses Fort, Barwara, in Rajasthan, on December 9, 2021. For the mehendi ceremony, Katrina had donned a Sabyasachi Mukherjee mehendi-green lehenga and had looked super gorgeous. She had channelised her Punjabi bride side with a maang teeka, a matching neckpiece and a pair of jhumkis. On the other hand, Vicky Kaushal had put his best foot forward and had complemented her on their mehendi ceremony. Vicky had looked dapper in a green pathani suit. The then-bride-to-be, Katrina Kaif had flaunted her beautiful mehendi design featuring intricate floral motifs. Her mehendi artist, Veena Nagda had engraved the then-groom-to-be, Vicky Kaushal's name on Katrina's ring finger. 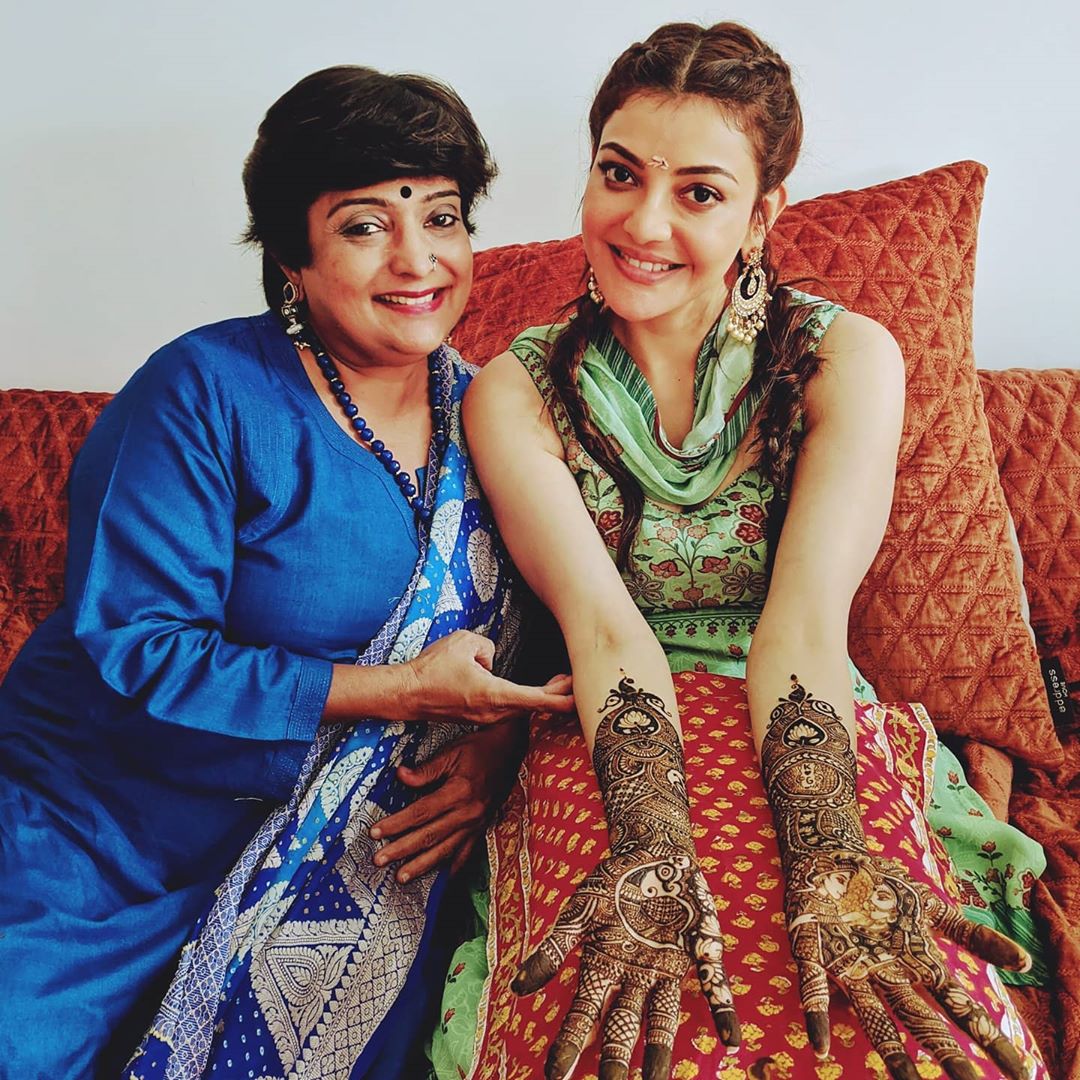 Singham actress, Kajal Aggarwal had got married to her longtime boyfriend, Gautam Kitchlu, on October 30, 2020, in Mumbai. Kajal had worn a beautiful breezy traditional outfit by designer, Anita Dongre and had flaunted her mehendi clad hands as she had smiled her heart out for the camera. She had completed her mehendi look with statement earrings and braided hair. And, we were in love with her beautiful mehendi design, credit to mehendi artist, Veena Nagda. 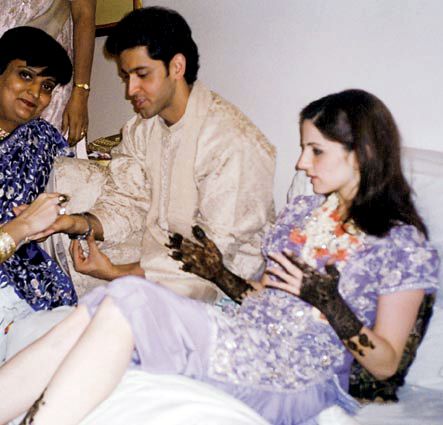 Hrithik Roshan and Sussanne Khan were once madly-in-love with each other and had shared blissful 17 years of relationship. The two had dated for four long years and had finally tied the knot in 2000. On their mehendi ceremony, Sussanne had looked gorgeous in a lavender coloured ensemble with a floral necklace and had applied henna on her hands. Sussanne had looked like a happy bride at her mehendi ceremony. In the picture, the then-bride-to-be was spotted with her mehendi artist, Veena Nagda, and her then-groom-to-be, Hrithik Roshan. Sonam Kapoor had walked down the aisle with her boyfriend, Anand Ahuja, on May 8, 2018, in a grand ceremony. For the mehendi ceremony, Sonam had donned a pastel pink kurta, which she had paired with a lavender-coloured palazzo and matching dupatta. Her outfit had featured golden embroidery and gota-patti work all over it. She had kept her hair open with slight twists on both sides and had accessorised her look with big earrings. The then-bride-to-be couldn't stop smiling as Veena Nagda had applied henna on her hands. 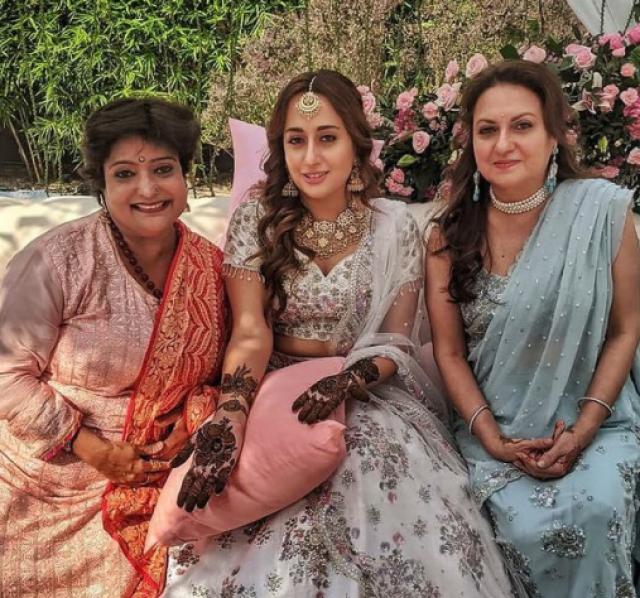 Varun Dhawan and Natasha Dalal had taken their wedding vows on January 24, 2021, at Alibaug. On their mehendi ceremony, the then bride-to-be, Natasha, had kept her look subtle. She had set a new trend by donning a white lehenga with a choker neckpiece, matching jhumkas and a maang teeka. In an interview with Zoom Digital, Veena Nagda had revealed that Natasha had wanted her own signature style design mehendi. Talking about the same, Veena had shared:

“She is a designer. She had given her own design that she wanted her own design. She did not have any demand of putting Varun's name on her hand. Woh demand unki mummy ji ka tha. Wo toh likhna hi hai. Natasha ji had made her own outfit, as she was a designer.” 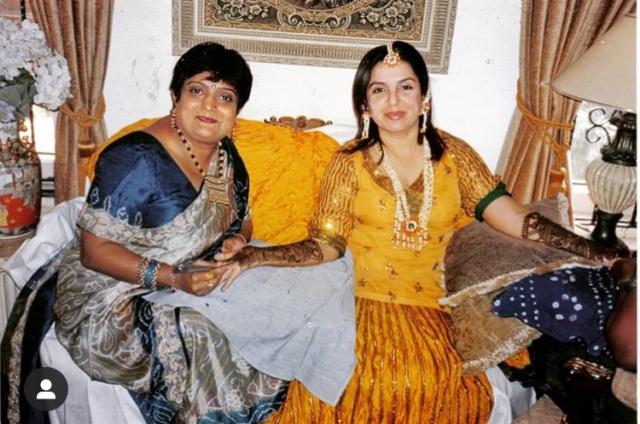 Director, producer, actress, dancer and choreographer, Farah Khan Kunder had got married to Shirish Kunder in 2004. Famous celebrity mehendi artist, Veena Nagda, had shared a lovely picture of herself with Farah from the latter’s mehendi ceremony. In the picture, Farah was seen in a yellow ghaghra-choli, and she had ornamented herself with subtle floral jewellery. And how can we forget to mention her halfway done mehendi!  Talking about the mehendi night, Veena Nagda had once revealed that Farah had wanted minimalistic designs on her hands. Veena was quoted as saying:

"Farah Khan told me she was applying mehendi for the first time in her life. She also said it was the first time she was wearing a ghagra-choli as she was always in jeans. She wanted very little mehendi, but Zarine and Farah (Sanjay Khan's daughter) told her the bridal mehendi should cover the hands entirely." 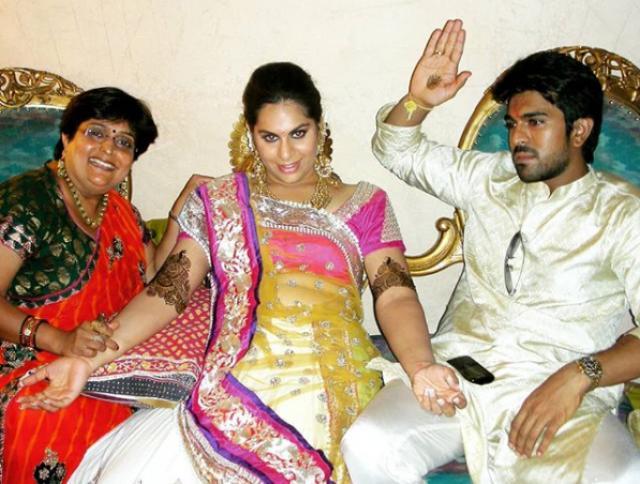 Upasana Kamineni and Ram Charan had got married on June 14, 2012, in a close-knit affair attended by their friends and family. For her mehendi ceremony, Upasana had looked gorgeous in a cream-coloured lehenga, contrasting pink-coloured choli with intricate work and a pink and yellow-coloured dupatta. She had accentuated her look with a heavy necklace and matching earrings. She had completed her look with dark kohled eyes, pink lipstick, and hair tied in a bun with gajra adornment. On the other hand, Ram Charan had complimented her by opting for a cream-coloured silk kurta and white-coloured pyjama.

Undoubtedly, Veena Nagda is a gifted artist, who has earned name, fame and recognition in Tinseltown. Moreover, her designs and talent prove why she's the favourite mehendi artist of celeb brides.