Aayush Sharma, ending all speculations and anxiety, has finally confirmed his wife, Arpita Khan Sharma's pregnancy at the IIFA Awards 2019. Read on to know what he said!

Pregnancy reports about celebrities are always an interesting catch! While most of them begin with much-talked-about speculations, it mostly ends up with confirmation by the celebs themselves. And thus begins our curiosity to know how things are shaping at the soon-to-be newbie parents end and when will they deliver their dollop of happiness. But the entire journey from speculation to confirmation is full of anticipation and one of the rising stars of Bollywood, Aayush Sharma, ended the same for us! (Do Read: Priyanka Kalantri And Vikaas Kalantri Finally Share First Pictures Of Their 2-Month-Old Son, Vihaan)

Arpita Khan Sharma and Aayush Sharma had recently celebrated Ganesh Chaturthi with their families and a ‘special someone’ (in all probability ‘then’) inside of her. Soon after her pregnancy speculations had started to pour in, the star sister had limited her public appearances. But during Ganesh Chaturthi celebrations, shutterbugs had captured Arpita, wearing a purple apparel, as she brought home two red-coloured Ganpati idols, accompanied by her mother, Salma Khan and sister, Alvira Khan Agnihotri, looking heavily pregnant! Later in the evening, she had also posed with Aayush Sharma and son, Ahil Sharma and had radiated pregnancy glow. Checkout the same here: 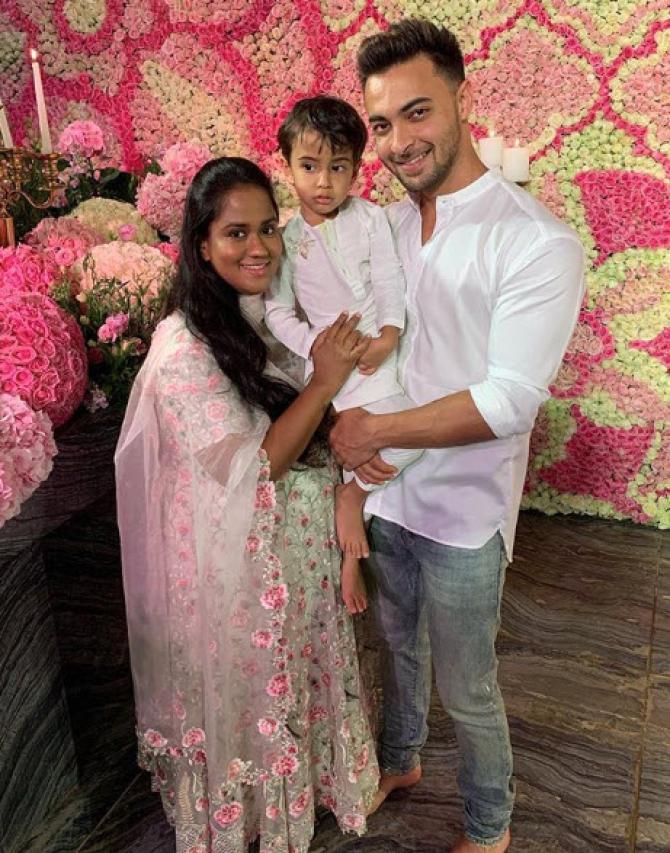 And thus, ending all speculations and anxiety, Aayush Sharma has now finally confirmed his wife, Arpita Khan Sharma’s pregnancy, at the red carpet of the IIFA Awards 2019. With an all-blushy preggy Arpita by his side, Aayush quipped, “The new arrival is very exciting. Yes, Arpita and I are expecting a second baby. It’s been such an amazing journey. It starts all over again and we just’ can’t wait for the baby to come.” What a stupendous ‘good news’ is this! Arpita Khan Sharma and Aayush Sharma were the newsmakers of August due to reports of the former’s second-time pregnancy. While neither Arpita nor Aayush had confirmed/denied anything then, it was a cryptic comment by the latter, which had suggested that Arpita’s second pregnancy is indeed a confirmation! A picture posted by the Loveyatri actor had him, son, Ahil and pregnant wifey, Arpita, happily posing for the camera. While the caption that had accompanied the picture was enough to make us go all ‘awww’, it was his reply to one of the comments that had captured all the attention. His comment could be as “Family, where life begins and love never ends”, to which, a friend of Aayush, Varun Gupta who had handled the marketing of his debut film, had commented, “All 4 are looking Amaazing”, with two cryptic emoticons. Aayush then had replied back by saying, “haha thanks sir”. (Must Read: Mahhi Vij Shares A Cute Poem For Her One-Month-Old Daughter, Tara Jay Bhanushali)

Arpita Khan Sharma’s second-time pregnancy rumours had begun when a Mumbai Mirror report had contained details on the same. The report had it that Arpita and Aayush are set to become parents for the second time and have been consulting a doctor from a leading Bandra hospital. It was also reported that it is a moment of ‘happiness’ for the Khan-Sharma family. It was on March 30, 2016, when Arpita Khan Sharma and Aayush Sharma had embraced parenthood for the first time when they had welcomed their baby boy, Ahil Sharma. Ahil is the apple of the Khan-Sharma family’s eye and time and again we have seen instances of his star maamu lot, Salman Khan, Sohail Khan, Arbaaz Khan turning into a tiny tot for him! Announcing the arrival of their first child, Aayush had written, “Our Prince has arrived.” Arpita too, had posted an endearing post about the same and had penned, “Thank you for welcoming our Lil Prince with open arms & hearts filled with so much love & showering him with all your blessings & good wishes. love from @aaysharma & @arpitakhansharma.” 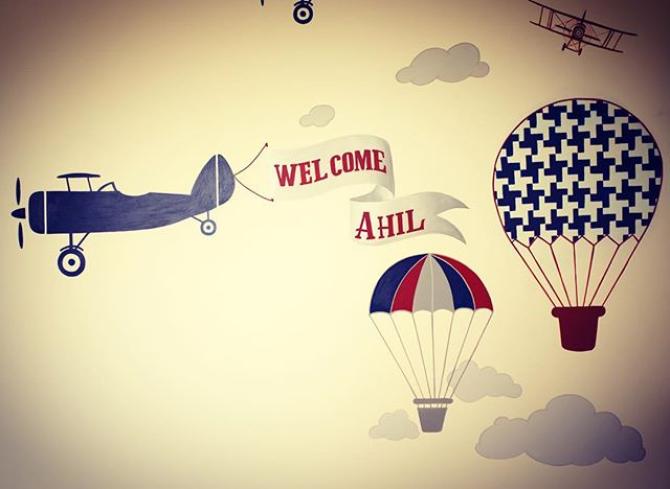 The Khans are one of the most talked-about families in the industry for their strong bonding and an amazing relationship with each of their family members. But Arpita Khan Sharma and Aayush Sharma’s camaraderie and love life are much cherished in the industry. In an interview with the Filmfare, Aayush had spoken about Arpita’s constant support and contribution towards his journey as an actor. He had stated, “She’s been my support from day one. She’s my backbone. She’s warm and caring. I didn’t know the seriousness of this profession.” (Also Read: Mandira Bedi Opens Up On Motherhood, Says, 'I Was Scared That Pregnancy Will End My Career') 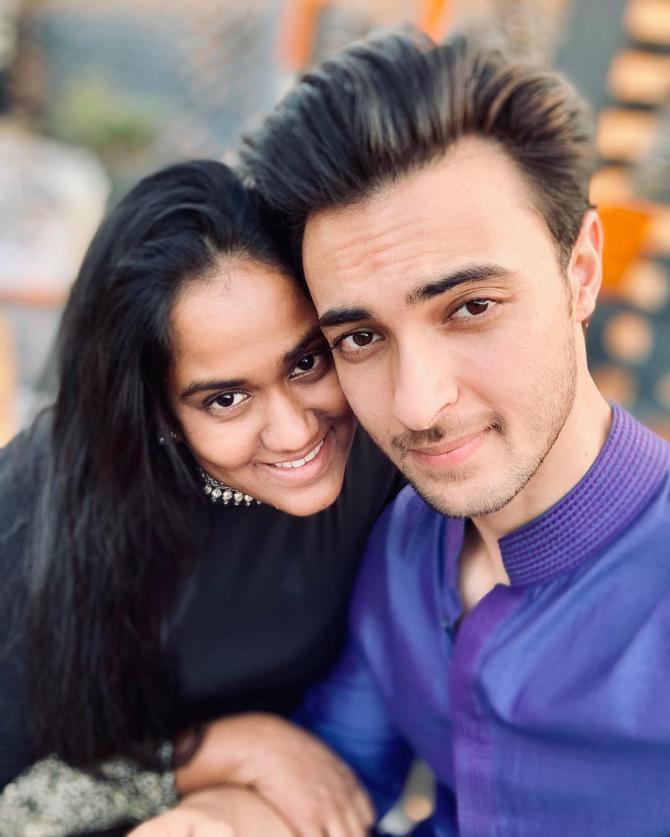 Aayush Sharma had further continued, “When I started training under Bhai it came as a rude shock. I realised it’s not as easy as it looks. She was the one, who kept me motivated. She said, Listen you have to do it for me, for our son Ahil, for yourself...Like one day I had to do an action sequence in Gujarat. But I was unwell. Arpita told me on the phone, you can declare a pack-up. No problem. But remember, when one-day Ahil goes on the set, he should hear that his father used to perform like this and under such conditions. That will motivate Ahil to work harder. Arpita’s one person, who never gives up. On days when I come home tired, she says, Be grateful you have work. There are many, who wait for this opportunity. So, don’t let it go.” 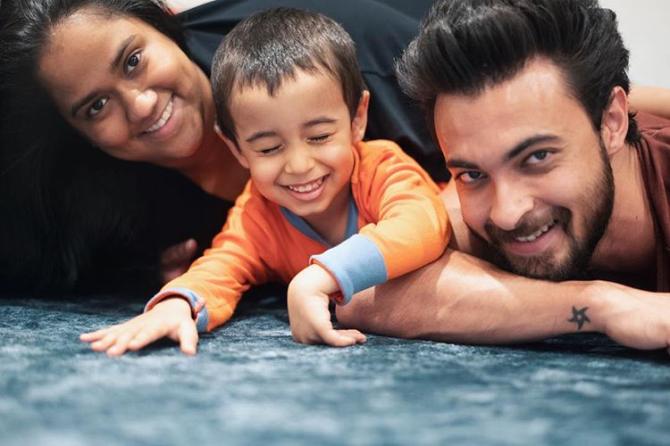 How amazing is this news! Tonnes of congratulations, Aayush and Arpita!