Bollywood actor, Aamir Khan's daughter, Ira Khan shared a cutesy picture with her brother, Junaid and his incredible weight loss journey will leave you stunned and surprised. See inside!

Celebrities and their love lives have always been the talk of the town. One amongst the others has been Mr Perfectionist of Bollywood, Aamir Khan. The Raja Hindustani actor had walked down the aisle with film producer, Reena Datta in the year 1986 and had a silent divorce in 2002. Together, the couple has two kids, Junaid Khan and Ira Khan. It has been a long time that rumours of Junaid's making a debut in Bollywood are doing the rounds in the media. (Recommended Read: Arpita Khan Sharma Surprises Her 'Valentine', Aayush Sharma With A Romantic Date, He Shares Glimpses)

Last year in a media interaction, Aamir had opened up about the same and had cleared the air. When he was asked if he is planning to launch his son anytime soon in Bollywood, he had shared that it is completely up to Junaid to decide. Also, he had clearly stated that his son has to earn his place in the industry all on his own and that he can only show the path to him. Now, Junaid's sister, Ira Khan shared a picture with him, and it is creating a huge buzz on the internet, as it speaks a lot about his ambition of making a name for himself in Bollywood. Scroll down to take a look! On February 15, 2021, Bollywood superstar, Aamir Khan's daughter, Ira Khan took to her Instagram handle and shared a beautiful picture with her elder brother, Junaid Khan. In the picture, the younger sister can be seen giving a lovely bouquet of flowers to her brother on one-knee-down and looked stunning in her outfit. The delighted brother, Junaid posed for the camera with a bright smile and can be seen wearing a peach coloured t-shirt and blue jeans. However, the main highlight of the picture that has stunned everyone is Junaid's amazing weight loss transformation. The youngster looked completely different in his cool short hair look and fit physique. Ira penned a sweet note for her doting brother along with the picture, and it can be read as "Junnuu! This wasn't his first play or his first show or our first play together but.. today is his first day! Of shoot. And I love this picture. He's been acting for a few years now but it's still new for me. He even acted my play so I should be over it... but I've been his younger sister longer than any of the other things." Going further in her note, Ira Khan revealed how professional Junaid is in terms of his work, as he never shares anything about the scripts of the projects he's doing. Like every sibling in this world, Ira teased her brother's properness, saying that he'll surely bore his audiences with it. The doting sister added the sweetest of compliments in her note and penned, "His professionalism is unparalleled. I'm super excited for him. Can't wait till he blows everyone away. And irritates them a little with his properness. (HE REFUSES TO TELL ME ANYTHING ABOUT THE FILM. SO IRRITATING. I WANT INSIDE SCOOP) and then I can go to set and embarrass and trouble him! #proud #excited #bigbrother #firstday #shoot.” (Don't Miss: Sunny Leone Exchanges 'Varmala' With Her Husband, Daniel Weber Almost A Decade After Their Wedding) For the uninitiated, Aamir Khan's son, Junaid Khan is going to make his debut in Bollywood with the film titled, Maharaja that will be directed by Siddharth P Malhotra. The film is based upon the famous Maharaj Libel Case that had happened back in 1862. A lot of famous actors are also going to be a part of this project, like, Jaydeep Ahlawat, Shalini Pandey, Sharvari Wagh, and many others. There's no doubt that Junaid is all set to make a ground-breaking debut in Bollywood as there's a lot of pressure on his shoulders to break the box-office, credit to his father, Aamir Khan's incredible legacy in Indian cinema. Well, the early signs are quite promising as his weight loss speaks a lot about his dedication and enthusiasm to prove the mettle of his talent and skills. (Also Read: Shilpa Shetty Kundra And Raj Kundra Did This Hindu Ritual On Their Daughter Samisha's First Birthday) 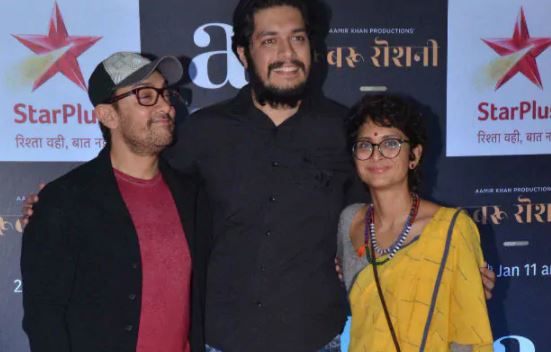 What do you think about Junaid's weight loss transformation? Let us know!